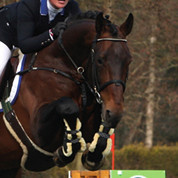 About - Elvis Ter Putte carries the blood of the fantastic stallions Diamant de Semilly, Darco and Quidam de Revel. International winner under the saddle of Karline De Brabander, he was also 6th of 6 YO World Championship and 4th of 7YO Belgian Championship. He was the most represented stallion during the last BWP Selection with three new approved stallions.

Sire-  Diamant de Semilly is an exceptional showjumper and sire, he transmits to his offspring his strength, scope, great balance, wonderful canter, suppleness, uncommon ease and super willingness, which make him a dream stallion! Diamant de Semilly is ranked since several years best Selle Francais Sire and he is already 5th in the World Sires Ranking (2013 WBFSH Jumping Sire Ranking)! He combines the power and great ease of his sire, Le Tot De Semilly with the blood of his excellent damline (same as Almé).

Dam- Elvis's Damsire is the legendary Darco. Darco is one of the most accomplished show jumping sires of all time. He is a leading stallion that has produced the most offspring competing at Grand Prix in the world. For five years Darco led the World Breeding Federation of Sport Horse jumping sire rankings and produced over 3000 foals. He won his first World Cup qualifier in 1988 with Ludo Phillipaerts and in 1989 they placed at the WEG. Among countless other top level victories in international showjumping, Darco and Phillipaerts competed at the 1992 Olympic Games in Barcelona.