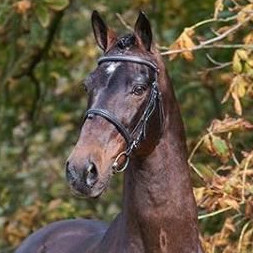 
Terms: €1250 + VAT for unlimited attempts with chilled semen for one named mare in one breeding season. If the mare is not in foal by the 1st of October, then a €625 refund applies.

About/Performance- The pedigree of Keur stallion Emilion exemplifies performance traits. His "Keur, Preferent" IBOP-A' dam, Ramirha, is the daughter of the full-sister of the Holstein legend, Lord. Emilion is much like Lord - a true sire of jumping horses.

Emilion's own performances are impressive. He won the World Cup at Mill Street, and placed in the following Grand Prix: 2nd in Donaueschingen, 4th in Valkenswaard, 5th in London and 6th in the World Cup at Aarhus. With the German team, he was 4th in Dublin and Rotterdam, and 2nd in Bremen.

Progeny - As a sire, Emilion belongs to the world's best jumping horse producers. His offspring are performing worldwide in Grand Prix and World Cup classes. Seldana is currently most famous. This top performance mare won the Silver Medal at the World Championships in Kentucky. She also was Silver Medallist at the European Championships in 2009, while a part of the Italian Team.

Emillion's son, Bilion, was Champion of the 6-yr. old Jumpers - East Coast/America - coming off his win of the 5-yr. old Championships in the same series.

Emilion: Has proved to be one of Worlds best jumper producers.

Use him now while he is still available!