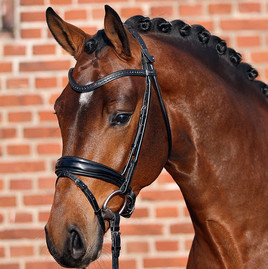 
Terms -  €800 + VAT for unlimited attempts with chilled semen on one named mare during one breeding season. If the mare is certified not in foal by 30th September, a 100% credit applies the following season for any stallion from the same stud.

About & Performance - Encanto is an extremely strong son of Escolar, who has a lot of power, momentum and ground covering strides thus has the best conditions to shine as a future dressage horse.

Gerd Sosath says: "He's an incredibly great stallion, who will strengthen our dressage horse lines from 2022. This son of Escolar already shows an outstanding stability and strength in the body when loose schooling and lunging, which means that he can be paired very well with many of our blood-influenced dressage mares. It combines the best bloodlines from the German breeding areas via Escolar, Sandro Hit, Weltmeyer and Rubinstein."

Sire - Father Escolar was a two-time national champion under Hermann Burger and now ridden by Hubertus Schmidt has enjoyed numerous other successes such as the reserve in the Nuremberg Castle Cup and a fourth place in the Louisdor Prize. In 2019, the stallion Grand Prix and Grand Prix Special was victorious, and was selected for Olympic squad and received the "Otto Lörke Prize" as the best German Grand Prix horse.

30 sons of Escolar have already become licensed stallions and many others have become auction price highlights, successful sport horses or state premium mares.

Damline -  Vanya's sire, Sandro Hit leads the WBFSH rankings as the best dressage sire in 2021. He was the Dressage Horse World Champion and National Champion and shone with his light-footed and typical offspring. Sandro Hit produced over 200 licensed sons, countless auction toppers and premium stallions.

At the Olympic Games in Tokyo, a total of eight Sandro-Hit descendants competed, including Showtime FRH (Dorothee Schneider), who secured the team gold medal and Salvino (Adrienne Lyle/USA) in the team silver.

The powerful damline of the winning state premium mare Wanja contains breeding powerhouses such as Weltmeyer and Rubinstein I. From the granddam comes the Grand Prix successful Pretender (v. Prince Thatch xx) and the reserve winner Deventer (v. De Niro). His half-sister Fi Delia H is successful under Ninya Wingender in dressage and became Vice State Champion of the Young Riders in Westphalia in 2020.