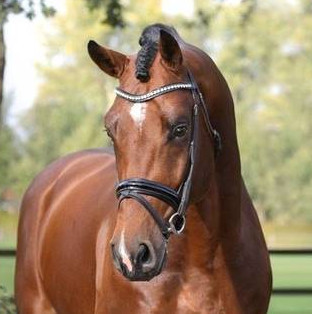 
Terms: €1200+VAT for unlimited attempts with chilled semen on one named mare during the season. If the mare is certified not in foal by the 30th September, €700 +VAT will be refunded.

Frozen is available on a pregnancy basis only.

About- A royal, masculine personality, large-framed and impressive stallion. Erdinger is an energetic stallion that convinces with always engaged hindquarters and great mechanic in trot as well as an uphill canter and a walk, supple moving through the entire body swinging in rhythm with the gait.

In 2017, as expected, he was striking at his 14-day test in Neustadt (Dosse) where he finished the test as clear victor of the dressage index with top scores: a 9.5 for trot and an 8.87 in total.

Sire- The sire Escolar, who characterized Erdinger clearly, was twice Bundeschampion of young stallions under Hermann Burger in 2012 and 2013. In the meantime, he is victorious up to Inter I classes under Hubertus Schmidt. Escolar's own performance lives up to this reputation. Described as the “stallion of the century” by his rider Hubertus Schmidt, the exceptional athlete was nominated for the Tokyo Olympic squad in 2019 when he was ten years old. It has long proven its quality with victories up to the international 4 * level. He passes this on to his offspring without restriction: They are powerful and strong in character, demonstrate enormous talent for movement, dynamism and willingness to perform. Escolar's heredity sets new standards.

Damline-  His dam is out of the legendary stallion Contender.  Contender was one of the most influential sons of Calypso II — who was an advanced showjumper with Michael Rüping before retiring to stud. He was out of the Ramiro daughter, Gofine, who was in turn by the great Thoroughbred sire, Ladykiller. He was reserve champion at his 1986 licensing and won the 1987 Adelheidsdorf stallion performance test with a jumping index of 146.62. He has 127 approved sons, including Contendro I.