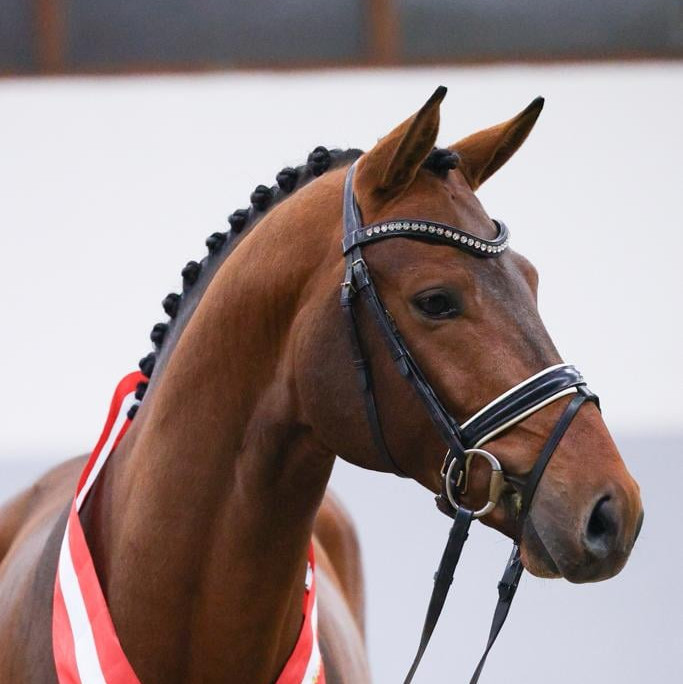 
Terms- €1100+VAT for unlimited attempts with chilled semen, for one named mare in one breeding season. If the mare is certified not in foal by the end of September, €800+VAT will be refunded.

About- Extra Gold is the highly regarded champion stallion of the Westphalian main licensing 2021, bred by Tina Hinnemann. Extra Gold caused a great deal of excited chatter and was highly coveted by all those there to witness the scene. Four weeks later, he confirmed his status as a favorite with his first appearance at the licensing on the newly prepared Dreiecksbahn in Münster Handorf in front of a full crowd. Powerful and extremely agile, the shining, glossy bay stallion delighted the audience. When lunging and running free, he showed what else he was capable of: tact, natural cadence, powered by a hind leg powerfully engaged underneath him, and the always uphill, well-jumped canter that leaves nothing to be desired!
With every single one of his public appearances, the young stallion distinguished himself by his unique, powerful mobility - indispensable attributes for a sport horse, especially in the collective lessons of classical dressage training.

Sire-  Escolar has been the talk of the breeding world in recent times, thanks to both his outstanding sport performances, and his up-and-coming offspring. He is a tall, large-framed, and powerful stallion, with expressive, ground-covering movement.

In 2012 Escolar made his debut at shows with results that would be hard to beat, winning one class after another, in Lingen, Cloppenburg and Münster-Handorf, where the judges didn't hesitate to give the highest possible score of 10.0. Just decorated with the Westphalian champion title, Escolar and his trainer, Hermann Burger, went to Warendorf where they took the Bundeschampionat title for three-year old stallions.

Escolar made his international debut at Aachen CDI4* in 2016, scoring over 73% in both the PSG and Inter I classes to finish fourth and second. In 2017, he returned and scored +70% again. In 2017 Escolar was second (and crowd favourite) of the finals of the Nurnberger Burgpokal trophy on over 77%. In 2020, at the age of ten, the Escolar was nominated for the Tokyo Olympic squad under Hubertus Schmidt; meanwhile, his offspring caused a sensation.

Damline- Extra Gold's dam Aweih has competed up to Level 3/Medium. Her sire Apache was a Dutch warmblood licensed stallion by UB40 out of Tolanda (by Krack C).

Apache has 249 of his daughters registered with the KWP of which 71% have the ster predicate or higher. His breeding value is 154 points with a reliability of 95%. .