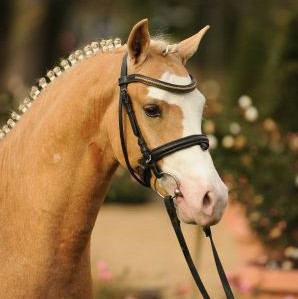 
Terms - €700 + VAT, allowing unlimited attempts on one named mare during one breeding season. If the mare is certified not in foal before the end of September, €350 + VAT will be refunded.

About & Performance -  Mr Right, the national champion stallion is a complete showstopper with his elegant looks and huge paces he has set a new standard to breeding, with offspring taking on his elastic movement and great character he is proving to be a great asset to pony breeding. This top stallion already has a large number of successful offspring, an example First Hummer who is competing internationally, licensed stallion FS Mr. President who was the winner of the 2016 German Riding Pony licensing.

Sire & Damline - A glance at his pedigree reveals that the breeding and sporting success of the offspring of FS Mr. Right is no coincidence. His dam FS Golden Sunlight produced our exceptional sire FS Don't Worry  in combination with FS Dacapo Doro . This leaves every reason to assume that FS Mr. Right and his offspring will continue to cause a sensation in the future.

Progeny - The account of FS Mr. Right has now got 45 licensed sons and 13 state premium mares . Based on the total number of coverings, an above-average quality density. His most famous offspring include  FS Mr. President, the Bundeschampion Movie Star, as well as Mr. Universum, who was successful in the advanced class  .