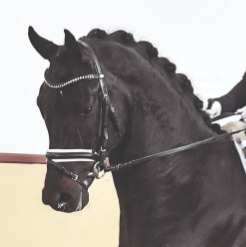 About & Performance - Performance and beauty go hand in hand in this young stallion, with his excellent paces and stunning appearance. He is light-footed, supple and very powerful, he has all the qualities to go far in both sport and breeding.

Sire - His sire Franklin has already achieved top placings up to Inter I level. He began his career as KWPN Champion Stallion, winner of his stallion performance test in the Netherlands and finalist at the World Championships for young dressage horses. Amongst his numerous licensed stallions, the Reserve Champion Stallion Franklin's Love PS, the KWPN Reserve Champion Kadans and Fendi, who is ridden by Sönke Rothenberger and is already successful in intermediate (M) level dressage competitions, particularly stand out. In 2017, he set a new 150,000 Euro auction price record with his filly Faretti. Faretti was also named best DWB dressage filly. In 2018, her full sister Feretti II was sold for the top price of an auction. In 2020, the filly Fascination became top price of the 2nd Helgstrand-Schockemöhle Online Auction, selling for 60,000 Euros. The title of "best filly" already went to Franklin's daughter Francisca Lightfoot in 2016. With the Danish gold medallist mare Fransisca, the number of Franklin's awarded daughters also increased.

Damline - This young stallion is Fairy Tale PS' first foal. She is the full sister of the stallion Fürst Toto and the half-sister of the stallion Donier. Damsire Fürstenball made an impression on dressage horse breeding very early on in his career. Record-priced auction foal, Oldenburg licensing and main premium winner, German Champion, finalist at the World Championships for young dressage horses and victorious at advanced (S) level up to Prix St. Georges, he has produced over 84 licensed stallions, including our Champion Stallion Fürst Zonik. The four German Champions Fürsten-Look, Festina PS, Fior and Feingefühl appear amongst his no less numerous championship winners. Fürsten-Look finished third in the Burg Cup Final with Isabel Freese/NOR. He has produced over 250 premium daughters, amongst whom the two Oldenburg Champion Mares Fiesta Danza OLD and Fünf Sterne as well as the Hanoverian Champion Mare Fine Lady especially stand out. His offspring, who are already internationally successful, include the European Young Riders Team Champion Four Seasons FRH/Alexa Westendarp.