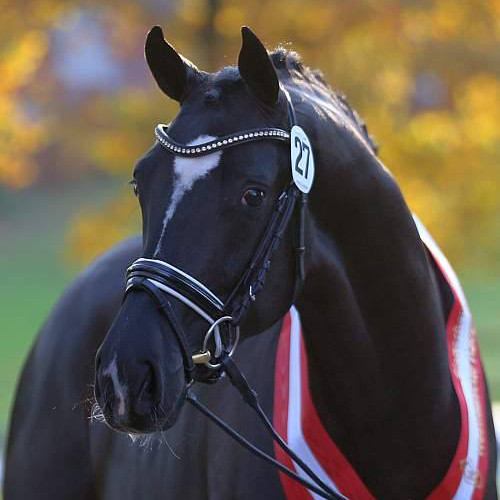 
Terms - €1000+VAT for unlimited attempts with chilled semen, for one named mare in one breeding season. If the mare is certified not in foal by the end of September, you will have a 50% credit to use the following season on any stallion from the same stud. If the first AI of the season is 1st July or later, the credit is 100%.

About - Fashion in Black NRW was the all-shining champion stallion of the Westphalian main licensing 2017 in Münster-Handorf. A well deserved title, as he combines harmony through the body and a brilliant type with a high class basic gait arrangement. He is uphills with the highest degree of elasticity. His clever nature and striking exterior makes this extraordinary youngster a highlight at any show.

Performance - His performance has been exceptional, having gained the title Champion Dressage Stallion in the Westphalian licensing in 2017. He was the reserve champion in his 50 day test in 2018 with the respectable final score of 8.89 In 2019 he was vice Westphalia champion, the same year he was also vice Bundeschampion.

Sire - Having been pronounced Champion Stallion of his licensing in 2011, For Romance did not disappoint during his 30-day test in Schlieckau, passing with super scores. He received a 9.25 for his trot and rideability, a 9.0 for his canter and an 8.88 for character. He won his first advanced level dressage classes as a seven-year-old and competed in the final of the Nuerberger Burg Pokal. In 2012, For Romance's full sister Fasine took the Oldenburg Champion Mare title - a brother and sister winning both these titles is a feat that is so far unique in the history of the Oldenburg Verband.

Damline - The dam's sire Lauries Crusador xx is considered the most important thoroughbred in recent Hanoverian breeding history. In 2006 he was the only thoroughbred to be awarded the title “Hanoverian Stallion of the Year” due to his merits as an outstanding dressage sire.