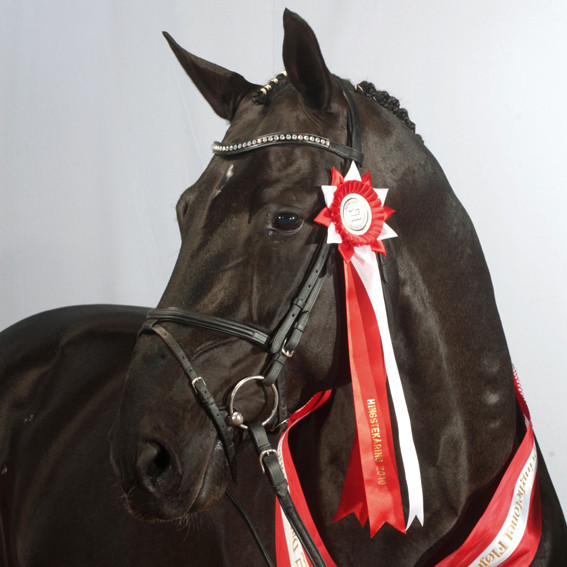 
Terms: €1200 + VAT for unlimited attempts for one named mare for one breeding season. If the mare is certified not in foal before Sept 30th, you get a 50% credit the following year to use on any stallion from the same stud. If your first AI was July 1st or later, your credit in the event of non-pregnancy (certified before Sept 30th) is 100%.

About - Favorit Ask has an almost unparalleled pedigree when it comes to performance breeding. All three stallions in his pedigree have participated in either European Championships, World Championships or Olympics. He is a big, large framed stallion of extremely good type, with a well set neck and a long, sloping shoulder. He has a very good canter with good suppleness and balance. Favorite Ask has a full brother, Elvis Ter Putte, who is licensed in Belgium was second in the Belgian four-year-old championships and fourth in the seven-year-old championships.

Performance - He won his 35-day test with a total of 901.5 points in jumping and at Herning in 2010, he was the most talked about stallion. He is now jumping internationally at 1.40m level with good placings.

Sire - Diamant de Semilly topped the WBFSH Sire Rankings for the second time in 2016, having been inside the top ten since 2012. During his career, he was French national champion and WEG team gold medallist in 2002, and European team silver medallist in 2003. His offspring include Quickly Du Kreisker (FEI World Number One 2015), Don VHP Z (winner of the Rome GCT), Utamaro D’Ecaussines (member of British Nations Cup squad), Hello Guv'nor (winner Aachen 2016), and Helidor Hybris, who jumped national grand prix as a 7-year-old. Diamant de Semilly is known for his utstanding power, suppleness and balance.

Damline - The dam has produced a further grand prix jumper in addition to Favorit and Elvis, while grandmother, Quinette Ter Putte, had several placings in 1.50m classes and produced the licensed stallion Bonjour Ter Putte.

Progeny - Favorit Ask's offspring are supple and extremely rideable but as a general rule he does not add size. A high proportion now have international results at 1.30m and above, see https://www.horsetelex.com/horses/progeny/511516/favorit-ask