When you see his foals, you want one! 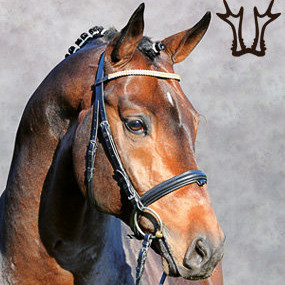 
Terms - chilled semen €1200 + VAT, allowing unlimited attempts with chilled semen, on one named mare in one breeding season. If the mare is certified not in foal before the end of September, then €900 + VAT will be refunded.

About - Fidertanz is an incredibly powerful and charismatic stallion known for his exceptional rideability and his outstanding movement.

Performance - The celebrated 2004 NRW Champion Stallion, Fidertanz dominated his 30-day test in Neustadt-Dosse, and then a year later took the Vice Champion title at the Bundeschampionat in Warendorf, with a score of 9.5 from the guest rider. In 2006 he was awarded the dressage Hauptprämie in Oldenburg in recognition of his outstanding first foal crop. In 2007, Fidertanz received a score of 8.8 in a qualifier for the Bundeschampionat and thus fulfilled the performance requirements for licensing. He meanwhile won up to Prix St. Georges and competed international grand prix under Antonio Do Vale.

Sire - Fidertanz is by Fidermark I, the winner of his stallion performance test, Bundeschampion, and Grand Prix winner who left the breeding stage early due to his untimely death. He is also the sire of licensed grand prix stallions For Compliment, and Fürst Piccolo, among more than 30 others.

Damline - Fidertanz's dam, granddam and great granddam, from the performance line of Astfläche, all received a state premium. His dam has produced five state premium daughters, while the grand-dam Frühlingssonne produced the licensed stallions Disconto and Fanconi, with Frederiko and Paradiso also descending from this mare line. Ravallo has produced multiple grand prix horses including River Of Joy and Roble.

Progeny -  Almost 50 sons of Fidertanz are licensed: Fidertanz's offspring are highly coveted and bring top prices, proven by high priced foals in Verden, Vechta, Münster-Handorf and in Switzerland. In 2008 a Fidertanz colt bred by Elisabeth Albers in Löningen won the German Foal Championships in Lienen. Six of Fidertanz' sons from his first crop were licensed, including the NRW Champion Stallion Flanagan, who later participated in the Bundeschampionat and is now competing at grand prix, placing fifth in the U25 GP in Aachen and competing at the U25 European Championships. He already has two further grand prix son competing at grand prix;  Fiederglanz and Latinotanz, who won six successive small tour classes at Vidauban in nine days in 2015.

At the Stallion Auction in Verden, Feuerspiel sold for €220,000 Euros and a son named Fürstentanz took sixth place at the 2010 Bundeschampionat. Foundation and Franziskus are both exciting stallion sons who are now coming to prominence; premium stallion Franziskus is winning at Inter I with Ingrid Klimke, and Foundation is a spectacular, powerful yet supple stallion who is winning at Inter I under Matthias Rath with scores of over 75%, who won the Oldenburg Hauptprämie in 2012.

Fidertanz' daughters are of no less significance, for example the Oldenburg Champion Mare, Fifty-Fifty, who took the Champion Filly title at the German Foal Championships in Lienen, has now been sold to the Rothenberg dressage stables for further training. Florencia became the ZfdP Champion Mare, Fider's Tanzmarie was the 2nd Reserve Champion Mare in Münster-Handorf. 70 offspring, just from his first two crops, are now winning ribbons in tests for young riding horses and dressage horses which, according to the FN's predicted breeding value statistics, catapulted their sire to a top place among the best sires in Germany for rideability.