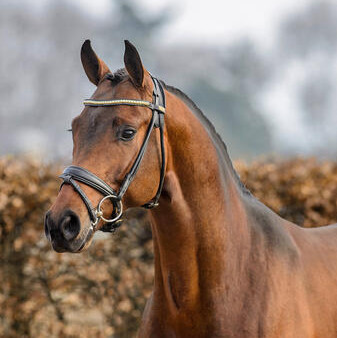 
Terms- €800+VAT, allowing unlimited attempts with chilled semen, on one named mare in one breeding season. If the mare is certified not in foal before the end of September then €500+VAT will be refunded.

About- Fine Touch, who was awarded a premium in Westphalia. "Quite loose and with natural kick from the hindquarters. On the lunge working well over the back. The stallion well balanced, with good load-bearing capacity and quite a lot of riding horse-points equipped." Thomas Münch, breeding director Westphalia

Sire- For Romance is the epitome of a modern sire, and is from a Voltaire dam line that has been accorded great success. Blessed with three excellent gaits, his canter and trot can only be described with superlatives and his character is also noteworthy. He stood out brilliantly in the strong lot of stallions at the 2011 Oldenburg Verband licensing and the enthusiastic spectators in Vechta gave him standing ovations. Having been pronounced Champion Stallion of his licensing in 2011, For Romance did not disappoint during his 30-day test in Schlieckau, passing with super scores. He received a 9.25 for his trot and rideability, a 9.0 for his canter and an 8.88 for character. He won his first advanced level dressage classes as a seven-year-old and competed in the final of the Nuerberger Burg Pokal. In 2012, For Romance's full sister Fasine took the Oldenburg Champion Mare title - a brother and sister winning both these titles is a feat that is so far unique in the history of the Oldenburg Verband.

Damline-  The dam, Verb.Pr.St. Fine Lady, is a half-sister to the Grand Prix dressage horse Royal Flush W (by Rockwell), to Brazil (by Bretton Woods), who was successful up to Intermediate I and to the Westphalian Champion Mare St.Pr.St. Brilliante (by Belissimo M). Through the dam's sire Franziskus, who is in the German championship squad with Ingrid Klimke, an interesting line breeding results to Florestan I, who follows in third place in the pedigree. The third dam St.Pr.St. Sunshine Lady comes the mare Donnachen (by Donnerhall). She is the dam of the licensed stallion Luciano Pavarotti (by Laudabilis), who is successful in the international small tour.