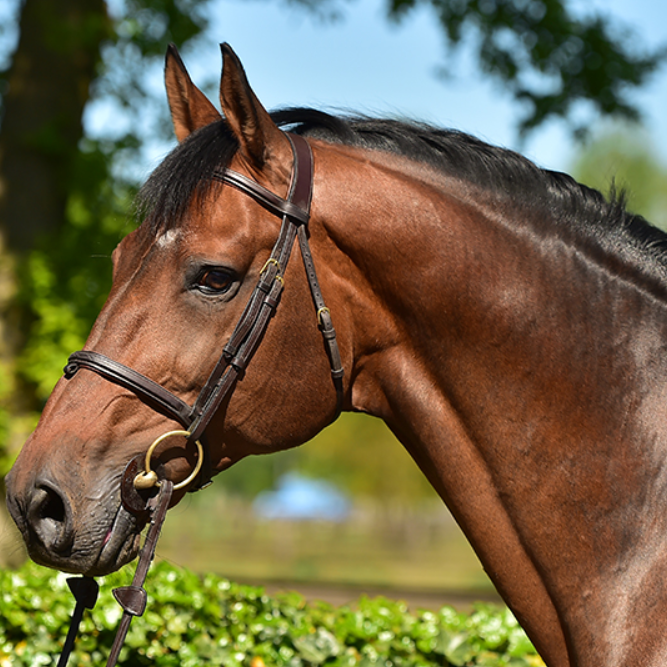 
Terms - €1200 + VAT for unlimited attempts with chilled semen on one named mare during one breeding season. If the mare is certified not in foal by 30th September, a 100% credit applies the following season for any stallion from the same stud.

About - Impressive in his appearance, enormous scope and always willing to perform - Finishing Touch Wareslage is an absolute course specialist with world class format. Equipped with great ability to jump, bascule and best technique, he has impressed under the Finnish rider Juulia Jyläs with outstanding performances in the world's most difficult jumping courses.

Performance - The pair won 1.60m classes, placed several times in stages of the Global Champions Tour and the World Cup, the pair represented their country at World and European Championships.

Sire - Sire Quival is by the legendary stallion Quidam de Revel and died early due to a colic. Second sire Quidam de Revel is a legend on his own; he has an impressive list of achievements and he himself participated in the Olympic Games in 1992, winning team bronze and finishing fourth individually under Hervé Godignon for France. His dam, sire and grandsire all competed at grand prix themselves - cementing his pedigree as one of supreme reliability. His dam produced a total of four licensed sons, one of them a full brother to Quidam de Revel, and an elite sport mare by Quat'sous, who herself is the dam of three international jumping horses and a CCI2* eventer. Quidam de Revel's two full sisters have produced three licensed sons between them, as well as several sport horses. Ten off his offspring competed at the 2002 World Equestrian Games, including team gold medallist Dollar de la Pierre, who also won a team silver at the 2003 Europeans and finished 7th individually. He has produced more than 130 grand prix offspring, includuing Maikel van der Vleuten's Verdi, super-sire Nabab de Reve, Guidam, Quasimodo Z, Lys Platiere, Rahotep de Toscane, Quiwi Dream, and Quite Chin Chin Z. Quidam de Revel brings a lot of Thoroughbred blood into the pedigree, with three full-blood stallions in the third generation.

Damline - His dam, Qualita van de Groene Haag, was successful in 1.60m classes. With the Korean team, she won the silver medal at the Asian Games and placed 12th in the individual. Granddam Graffitie was successful up to 1.40m. Dam's sire Toulon is considered as one of the best sires worldwide. Toulon himself was highly successful under Hubert Bourdy and Jonella Ligresti. His victory in the Global Champions Tour in Sao Paulo (BRA) is unforgettable. His offspring also convince at the highest international level such as Living the Dream (Pius Schwizer/CH) and Bijou Orai (Olivier Perreau/FRA). In Germany, 65 offspring are competing on advanced level. In 2020, Toulon was ranked 3rd in the WBFSH ranking list.