Winners of the Longines Global Champions Tour of Hamburg 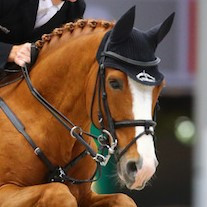 
Terms - €500+VAT for unlimited attempts with chilled semen, for one named mare in one breeding season. If the mare is certified not in foal by the end of September, €200+VAT will be refunded.

About - Firth of Lorne is a showjumper with a pedigree that shines with performers: sired by the Olympic medallist and multi-titled For Pleasure ,

Performance - Firth of Lorne won the CSI3 Grand Prix of Zwolle in 2018 as well as the CS3 Championat of Nórten-Hardenberg that same year and also had podium finishes at venues such as Aachen and Spruce Meadows. In 2014 he won the CSIS LGCT Grand Prix in Hamburg. I'm always happy when I can retire a horse that is still sound and fresh" Ehning told World of Showjumping, "Firth of Lorne is turning 16 next year, and for sure he could still have been competing for one or two more years-but he will now focus on his breeding.career and will be stationed in France. I'm very happy for the years I have had with him and Im sure he will do very well as a breeding stallion. I wish him the happiest of retirements Ehning concludes.

Sire - For Pleasure's international career was exceptional. He was on four gold-medal-winning teams for Germany; two Olympic Games (Atlanta 1996 & Sydney 2000, where they finsihed 4th individually), and two European Championships, at Hickstead in 1999 where he was 5th individually, and Donaueschingen in 2003. At Donauschingen, he also won individual bronze, the first ever individual medal for Marcus Ehning. He also won gold and silver medals at he German National Championships. His career earnings totalled over €1.8million, ahead of Milton, and his offspring have won over €2.5million between them.

Damline - His dam Starlight was retired from international competition in 2012.

�Marcus Ehning with Firth Of L