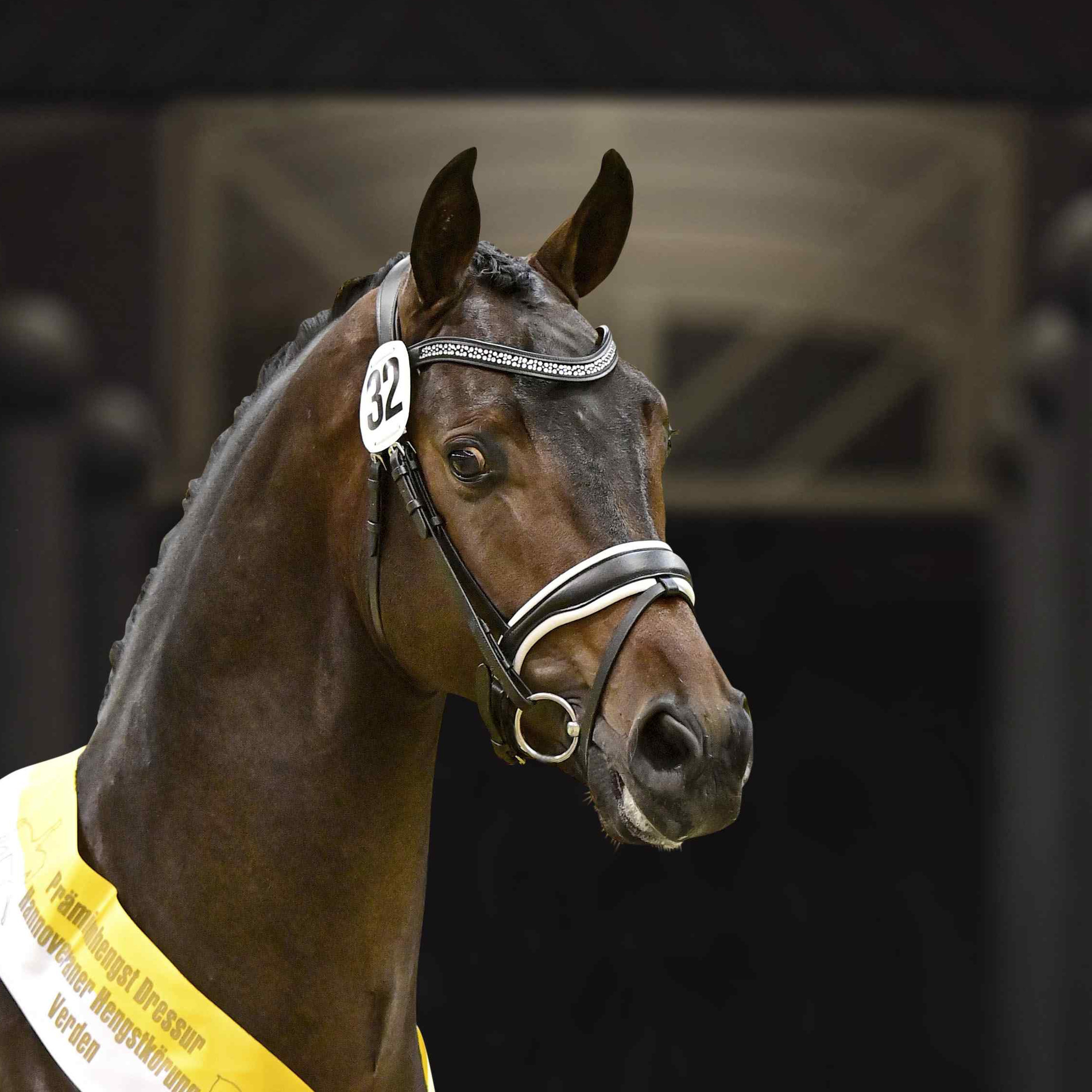 
Terms - €600+VAT for unlimited attempts with chilled semen on one named mare in one breeding season, if the mare is certified not in foal by the end of September €350+VAT will be refunded.

PLEASE NOTE: Blue Hors Flashdancer is collected on Monday, Wednesday, and Friday only and orders need to be booked before 8am for delivery the following day.

About & Performance - This Hanoverian Premium Stallion by For Dance / Dagostini / Stedinger is bred by Christoph and Angela Plate. Blue Hors Flashdancer was awarded Premium Stallion in Hannoveraner Verband 2021. This young stallion has exciting bloodlines combining For Dance, Stedinger and Dagostoni with a strong damline, he is out of the same damline as the Olympic horses Dante Weltino and Riwera de Hus.

Sire - His sire, For Dance, was a Premium Stallion at his 2015 Hanoverian licensing. He received a 10 for temperament and character at his performance test. In 2019, he qualified for the Bundeschampionat. For Dance has sired a number of of successful offspring including licensed sons.

Damline - The damsire Dagostini, who is sired by Dancier and Donnerhall, comes from a high-performance damline that includes both Grand Prix dressage horses, approved stallions, top mares and showjumpers up to 1.45m level. Dagostini himself has competed in Intermediate II dressage under Swiss rider Gina Kern.
Damsire Stedinger, who is sired by Sandro Hit and Landadel, was Premium Stallion at the Oldenburg licensing in Vechta in 2002 and has competed in dressage with placements in up to S-dressage under Dieter Weichert. As a 5-year-old, Stedinger qualified for the German Bundeschampionat in dressage in Warendorf.
As a breeding stallion, Stedinger is the father of more than 39 approved sons and 58 awarded mares. 59 of Stedinger's offspring are registered with victories and placements in S-dressage. In 2006, the Stedinger son Status Quo was Premium Stallion at the Oldenburg licensing in Vechta. In 2008, Stedinger had three offspring; the approved sons Schumacher and Statesman (sold at the Elite Auction in Vechta for € 400,000) as well as Santorini OLD, in the Bundeschampionat finale in Warendorf. Schumacher and Statesman placed 2nd and 3rd for the 3-year-old stallions and Santorini OLD became the final winner in the class for 4-year-old riding horses.
Stedinger's son Socrate de Hus won the French dressage championship in both 2009 and 2010, just as 2 offspring were in the WCYH final for 5-year-old dressage horses in 2010; Schumacher with Claudia Rüscher in the saddle, who achieved a bronze medal, and the Danish-bred gold medal mare and later Grand Prix horse; Tørveslettens Stamina, who came in 6th place. In 2010, Tørveslettens Stamina won the Danish Riding Federation's 5-year-olds dressage championship and the Scandinavian Open in Falstebo, just as she in 2011 qualified for the WCYH final for 6-year-old dressage horses and won the Danish Riding Federation's 6-year-olds dressage championship.
Another Stedinger daughter; Tørveslettens Snowflake (full-sister to Tørveslettens Stamina), qualified for the 4-year final at the Danish Riding Federation's dressage championship in Odense in 2011, she also received a gold medal at the Danish Warmblood Elite Show the same year. The Stedinger daughter Atterupgaards Minaia was also awarded a gold medal at the Danish Warmblood Elite Show in 2011, as well as the award as "Best 2-year-old mare of the year" for Danish Warmbloods in 2010. His Oldenburger damline has also produced Therese Nielshagen's Olympic horse, Dante Weltino, as well as numerous dressage and showjumping horses such as Riwera de Hus, who participated in the 2012 London Olympics.