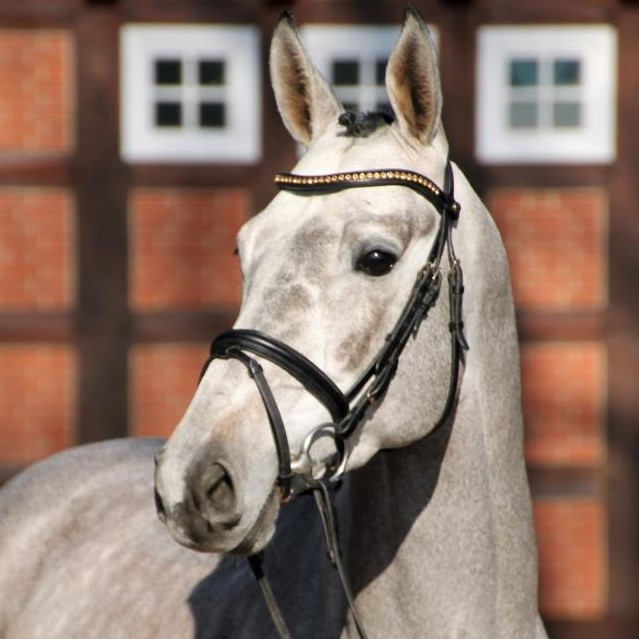 
Terms - €800 + VAT allowing unlimited attempts with chilled semen, for one named mare in one breeding season. If the mare is certified not in foal before the end of September, then a 50% credit applies the following year to spend on any stallion from the same stud. If the first AI of the year is July 1st or later, the credit the following year is 100%.

About & Performance - With his genetic background, this grey stallion is an absolute rarity for the breeding of show jumping horses of the most modern kind. With a completed 50-day test and an outstanding first crop of foals, he was able to show everything that makes a very good breeder and was then awarded the 1c - Main award of the OS Association awarded. "Correct, long-legged, ultra-modern blood foals with a very good sequence of movements" praised Dr. André Hahn at the first offspring evaluation.

His calm eye, athletic outline, great balance in the canter, technique in the air - this is what sets Flic en Flac apart from other stallions. A refiner with great prospects!

2021 Flic en Flac did his first show season with several clear rounds and placings. We are really looking forward of developing him in the sport next to the breeding this year.

Sire - Flic en Flac's sire Shaman du Yam's is an Anglo-Arab cross and was highly successful in 1.40m show jumping and became Vice Champion of the French show jumpers in Fontainebleau under Nicolas Delmotte at the age of seven before he was sold to McLain Ward in the USA.

Damline - Flic en Flac comes from a pure Anglo-Arab dam line, which is the fourth generation to the important mare Resena v. Nithard. This brought among other things the most important Anglo-Arabian Inschallah in the Oldenburg breeding area and the Cacir  (owner of Bella Rose and Emilio), which is known in Westphalia . His direct mother Resena du Rouhet represents her heritage as a broodmare and was successful in advanced tests herself.

Progeny - He has already produced several elite foals,  which led to him being selected as the 1c main premium stallion at the Oldenburg Hengsttage 2020.