A modern son of Florencio with a superb hindleg 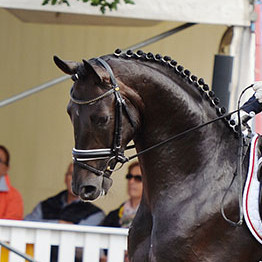 
Terms - €1200+VAT, allowing unlimited attempts within the season (ends mid August) on one named mare. If the mare is certified not pregnant before the end of September then a 100% credit applies the following year to spend on any stallion from the same stud (and the mare can change going into a new year).

About - Florenz is a modern stallion with very good elasticity in his paces; he is a very uphill mover with a strong hindleg, and was a crowd favourite at his Oldenburg licensing.

Sire - The pedigree of Florenz combines four of the best sires of recent years: the stallions Florencio, Sandro Hit, Donnerhall and Landadel. Father Florencio was 2004 and 2005 World Champion of young dressage horses and then competed to Inter I successfully with Hans Peter Minderhoud. He is also the sire of prolific stallions Floriscount and Charmeur.

Damline - Damsire Sandro Hit was Bundeschampion and World Young Horse Champion as a six-year-old, and became a foundation sire in his lifetime. He produced more than 180 licensed stallions and, in Germany alone, more than 160 grand prix horses. In 2016, he sired several participants of the Olympic Games, among them Showtime FRH (Dorothee Schneider) and Jimmy Choo SEQ (Mads Hendeliowitz). Sandro Hit is currently ranked third in the WBFSH Sire Rankings, having been inside the top ten since 2012.Florenz's grand-dam Donnerlady, produced a licensed stallion named Sandy by Sandro Hit, and the Hanoverian Champion Mare Fine Lady (by Fürstenball), while the great-grandmother, Landlady, is the mother of grand prix stallion Lord of Loxley (by Lord Sinclair).

Progeny - Florenz's first crops have been excellent, including several premium Oldenburg foals and now successful young horses in the sport. At foal shows, this stallions foals are said to move uphill and have drive. They are described as long legged, modern and they move through their body.