Attractive son of For Pleasure with strong motherline 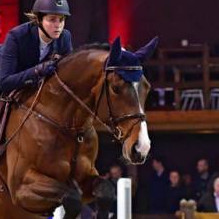 
Terms:  €1000+VAT for unlimited attempts with chilled semen, for one named mare, in one breeding season. If the mare is certified not in foal by the end of September, €700+VAT will be refunded.

About & Performance - Foncetti is a very attractive stallion, with a nice type and excellent movement, when he moves over a fence he demonstrates a very light, scopey, jump. His rideablity and good balance are great qualities this stallion not only offers to his riders but also passes onto his offspring. He was the winner of his 4 year old stallion class and has gone on to excel in young horse classes and international 1* competitions.

Sire -  For Pleasure is a sire who demonstrates suppleness, scope and rideability which is known for passing on to his offspring. He had an extremely successful career having retired at 20 he continued to win up untill his last ever show. He competed internationally and was on 4 gold medal-winning teams for Germany; two Olympic Games (Atlanta 1996 & Sydney 2000, where they finished 4th individually), and two European Championships, at Hickstead in 1999 where he was 5th individually, and Donaueschingen in 2003. At Donauschingen, he also won individual bronze, the first ever individual medal for Marcus Ehning. He also won gold and silver medals at he German National Championships. His career earnings totalled over €1.8million, ahead of Milton, and his offspring have won over €2.5million between them.

Damline - Foncetti's damline holds a string of Grand Prix offspring. Concetta has produced a wide range of internationally successful sport horses such as C. Million Dreams who competed at CSI5* making appearances at Grand Prix shows across the Globe, she also produced the full brother to Foncetti - Quinn van de Heffinck who was a Grand Prix stallion who jumped at CSI4* in Doha, St Tropez, he won the the 2019 Grand Prix in Hong Kong, won the Rabobank Prize in 2018.