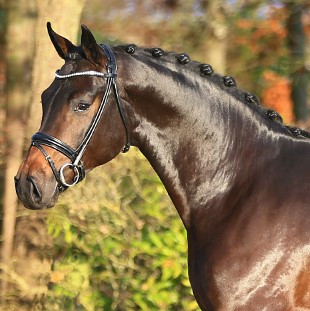 
Terms - €1000+VAT, allowing unlimited attempts within the season (ends mid August) on one named mare. If the mare is certified not pregnant before the end of September then a 100% credit applies the following year to spend on any stallion from the same stud (and the mare can change going into a new year).

About & Performance - For Austria is the progeny of two high class sires, he holds a large frame with a harmonious conformation. He shows a willingness to perform and demonstrates many qualities of a high class dressage horse. He has been successful from an early as he impressed the large audience and was the highest priced foal in Oldenburg Elite Auction in 2017. In 2020, he convinced as a ridden horse from the beginning. After a good breeding season, he passed his 14-days-test and won with a total score of 8.75.

At the beginning of 2021 For Austria finished his sport test with a total score of 8.6 in Stadl Paura. For the general impression and walk he received a 9.0. His canter was given an 8.5 and his trot an 8.0. For rideability he got an 8.67.

Sire- His sire For Romance I was awarded VTV Dressage Stallion of the Year award 2019, at the Vechta Stallion Liscensing show. He has been successful up to grand prix and his foals are acheiving top prices at auctions with more 30 liscensed sons and numerous premium mares he is one of the top breeding sires.

Damline-  For Austria comes out of the mare line of Golden Gate. His mother is the sister of the licensed and internationally successful Grand Prix horse Lord of Loxley (Hans Peter Minderhoud, NED). Also, the licensed stallions Charme, Atrejou, Law and Order, C'est la Vie (S-jumping), Borowski and our Florenze (lntermediaire I) belong to For Austria's dam line. Further S-successful dressage horses are for example Groszor (Adrian Lopez Diaz-Pavon, ESP), Rudi (Rochelle Kilberg, CAN), Tempo Ene HM (Guillaume Lundy CNE, FRA), Solo Dancer (Friederike Wolf) and With Me (Nina Kuckartz). His damsire, Diamond Hit holds many titles having been awarded the Vice Bundeschampion Champion as a 4 year old and Vice World Champion as a 5 year old. He also has a son who held the title of Bundeschampion of the 5 year old dressage horses in 2017.

Progeny - For Austria's first crop of foals impressed with a similar set up. They have good front leg movements and an especially good stride. Four of the foals were awarded with Elite Foal awards.