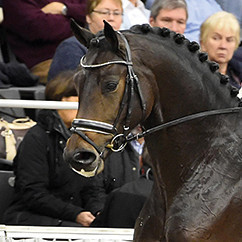 
Terms - €1500 + VAT for unlimited attempts with chilled semen, on one named mare in one breeding season. If the mare is certified not in foal before the end of September, a 100% credit will apply for the following season to use on any stallion from the same stud.

About - For Dance is a young stallion from a very exciting pedigree. He is an elastic mover who really covers the ground, moving with balance and power in all three paces. He shows a lot of potential for collection, and is very expresssive. In addition, he has a lovely temperament and character and is already proving to be very trainable.

Performance - He was a premium stallion at his 2015 Hanoverian licensing, and was Sosath's most popular stallion in 2016. He received a 10 for temperament and character at his performance test. In May, he qualified for the 2019 Bundeschampionat. His first foaling year was outstanding  and highly recognized at the licensings.

Sire - At his 30-day test in Schlieckau, For Romance received a 9.25 for his trot and rideability, a 9.0 for his canter and an 8.88 for character. He won his first advanced level dressage classes as a seven-year-old and competed in the final of the Nuerberger Burg Pokal. In 2012, For Romance's full sister Fasine took the Oldenburg Champion Mare title - brother and sister winning both titles is a feat that is so far unique in the history of the Oldenburg Verband. Grand-sire Fürst Romancier took fourth place at the World Championships for young dressage horses as well as at the National Championships, and received the Hauptprämie award from the Oldenburg Verband for the best first crop of foals. He is by the influential Fürst Heinrich, sire of double World Young Horse Champion Woodlander Farouche, out of a mare by Romancier, who competed to Inter I himself and is from the mare line of Ahlerich.

Damline - For Dance's dam Reverie has also produced the 2008 Westphalian licensing champion Flanagan (by Fidertanz), who has won and been placed up to grand prix level in Eastern Europe with young rider Polina Afansieva, including fifth in the U25 Aachen grand prix in 2016. Flanagan's full sister, First Famous, is winning at international small tour level in Australia. Damsire Rubiloh scored a 10 for rideability in his performance test, and was sixth in the Bundeschampiont as a six-year-old. Third sire Ehrentusch competed up to grand prix dressage himself and has produced grand prix horses for both dressage and showjumping.

Progeny - For Dance's first crop of foals impressed with outstanding movements, long legs, good eyes and very appealing faces. In 2019 six of his sons were approved for licensing and in 2020 more followed.