Grandson of the great Weihegold OLD 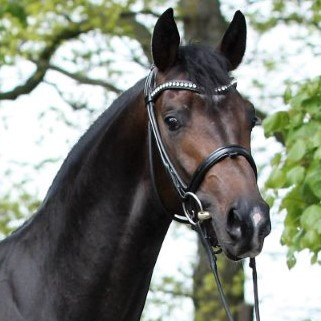 
Terms - €1100+VAT for unlimited attempts with chilled semen, for one named mare in one breeding season. If the mare is certified not in foal by the end of September, €800+VAT will be refunded.

About & Performance - For Gold is the exciting stallion by Franziskus and Blue Hors Zack, in 2018 he competed as a finalist in the dressage young horse 5 year old class in Ermelo and leaving with the high scores of 8.74. In 2019 he competed in Ermelo in the WBFSH Dressage World Breeding Championship for young horses he ranked 9th with rider Stephanie Wolf with scores of 9.0 for trot and an impressive final score of 8.82.

Sire- won the qualification for the German Championships as a foal. Franziskus passed his performance test in Münster-Handorf successfully; he got scores of 9.0 for trot, canter and rideabilty, and 9.5 for his character. Franziskus continued on his successful path, winning the Bundeschampionat as a four-year-old. Ingrid Klimke began riding Franziskus at the end of 2013, and was victorious with him in his first young horse classes. He is now competing successfully at intermediate I, winning at Münster, and finished second in the Nürnberger Burg-Pokal Trophy, on a score of 9.5.

Damline-  His damsire Blue hors Zack  was champion of his KWPN licensing in 2007, performance test champion and won the qualifier for the Danish six-year-old championships on an exceptional score of 9.22. After a delay in his training due to an eye injury, Zack has accelerated up the grades, was second on his grand prix debut, and in 2016 he won the grand prix and the grand prix freestyle at Ankum in only his second attempt at the level. Since then, his progress has been outstanding. In early 2019 he won the Den Bosch CDI3* GP Kur with over 84%, and weeks later finished 4th in the World Cup Final in Gothenburg.