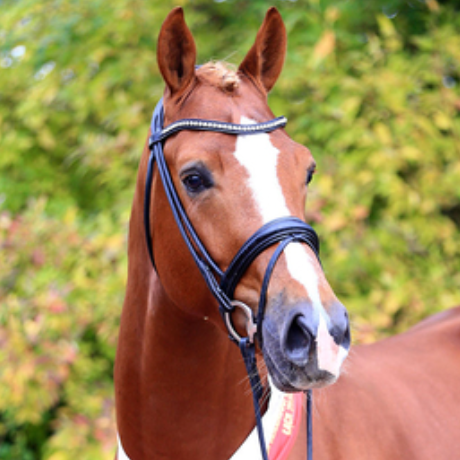 
Terms - €1000 + VAT for unlimited attempts with chilled semen on one named mare during one breeding season. If the mare is certified not in foal by 30th September, a 100% credit applies the following season for any stallion from the same stud.

About & Performance - The AES licensed For my Pleasure is a very modern son of the legendary stallion For Pleasure. His pedigree unites international performance blood of the highest level. Gerd Sosath discovered For my Pleasure during the Free Jumping Championships in Saasveld in the Netherlands and was immediately drawn to him. For my Pleasure was awarded the best jumping stallion at his 100-day-test in Poland. He received a 9.0 for his ability to jump and an 8.9 for his loose jumping.

Sire -  For Pleasure was on four gold-medal-winning teams for Germany; two Olympic Games (Atlanta 1996 & Sydney 2000, where they finsihed 4th individually), and two European Championships, at Hickstead in 1999 where he was 5th individually, and Donaueschingen in 2003. At Donauschingen, he also won individual bronze, the first ever individual medal for Marcus Ehning. He also won gold and silver medals at he German National Championships. His career earnings totalled over €1.8million, ahead of Milton, and his offspring have won over €2.5million between them. He has produced more than 80 grand prix jumpers, with 18 of these being licensed stallions; a total of 70 sons of For Pleasure sons have been approved by various studbooks. His offspring include Flora De Mariposa, Derly Chin De Muze, Fit For Fun, Firth Of Lorne, Forsyth, For Sale 6, Another Pleasure, Hello Forever, and Epleaser van't Heike.

Damline - His dam Hinosa C was already successful at the age of 6 in the international Youngster Tour on with Lyanne Kuypers. Now, she is internationally successful with Maikel van der Vleuten. Dam sire, Vigo d’Arsouilles won the gold medal at the World Equestrian Games in Kentucky under Philippe Lejeune and made a significant contribution to the bronze medal of the Belgian team. The pair was placed in several Grand Prixs all over the world. During the last years, Vigo d’Arsouilles has become one of the new rising stars of German jumping horse breeding. A lot of 1.60m successful horse are by Vigo d’Arsouilles for example Vagabond de la Pomme, Go Easy de Muze, Dixson and Figo de Muze.