The talented son of two of the most respected sires in the breeding industry. 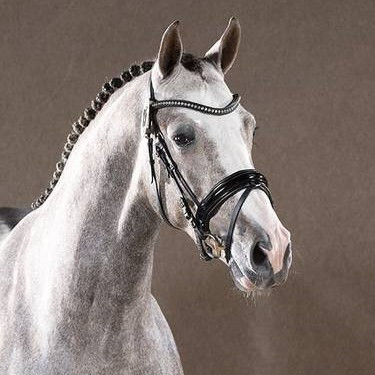 About - For Planet is a stallion who has some of the best bloodlines for the sport. For Planet showed off his impressive talent at his licensing in 2019 displaying huge scope, light footing and sheer passion for jumping. We hope that he will follow in the footpsteps of his proginators and based on what he has displayed already, there is no doubt he has all the potential to become a star.

Performance - Due to his age we are yet to see much of For Planet's performance however, he impressed in his licensing with his technique using his quick front end, his enormous scope and excellent balance.

Sire - For Pleasure was on four gold-medal-winning teams for Germany; two Olympic Games (Atlanta 1996 & Sydney 2000, where they finsihed 4th individually), and two European Championships, at Hickstead in 1999 where he was 5th individually, and Donaueschingen in 2003. At Donauschingen, he also won individual bronze, the first ever individual medal for Marcus Ehning. He also won gold and silver medals at he German National Championships. His career earnings totalled over €1.8million, ahead of Milton, and his offspring have won over €2.5million between them. He has produced more than 80 grand prix jumpers, with 18 of these being licensed stallions; a total of 70 sons of For Pleasure sons have been approved by various studbooks. His offspring include Flora De Mariposa, Derly Chin De Muze, Fit For Fun, Firth Of Lorne, Forsyth, For Sale 6, Another Pleasure, Hello Forever, and Epleaser van't Heike.

Damline - His dam Miss Cornet has only produced a few offspring however they are competing well, Chenoa L is competing at 1.35 succesfully and Chap L is competing Grand Prix internationally at 1.45m. His damsire Cornet Obolensky was second reserve champion and the spectators' darling at his 2002 Westphalian licensing. Then, at his 30 day test in Münster-Handorf in 2002, Cornet Obolensky left his competitors far behind, with a score of 9.24 in the partial index for jumping. The judges even gave him the maximum score of 10.0 for loose-jumping. In 2011, Cornet Obolensky won the gold medal with the German team at the European Championships in Madrid. In 2012, he won the World Cup qualifier in Zürich, the Nations Cups in Rome and Rotterdam, and was recognised as the most successful show jumper in Germany. Under Marco Kutscher, he won grand prix and Nations Cup competitions, including the Samsung Super League final in Barcelona, which he won twice. In 2008, he took home bronze at the German National Championship and won grands prix in Balve and Cervia, as well as in the Nations Cup competition in Rotterdam. He was also a member of the German Olympic team in Hong Kong. In 2009, he was second in the Bordeaux World Cup qualifer, third in the grand prix competition in Rio de Janeiro and was placed in the Global Champions Tour Final in Doha. His lifetime earnings are approximately €800,000.