The Hanoverian Sire of the Century 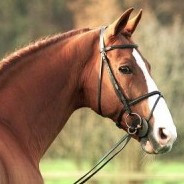 
The supply of For Pleasure semen is extremely limited - please contact the office if you are interested.

About - For Pleasure has been described as the 'Horse of the Century'. With his suppleness, scope and attitude being reliably passed on to his foals, For Pleasure is in as much demand today as he was during the height of his career. He retired at the age of 20, having won his last ever class, the Leipzig World Cup qualifer, and having been sound for his whole career before a tendon injury aged 19. For Pleasure semen is of excellent quality with very high conception rates.

Performance - For Pleasure's international career was exceptional. He was on four gold-medal-winning teams for Germany; two Olympic Games (Atlanta 1996 & Sydney 2000, where they finsihed 4th individually), and two European Championships, at Hickstead in 1999 where he was 5th individually, and Donaueschingen in 2003. At Donauschingen, he also won individual bronze, the first ever individual medal for Marcus Ehning. He also won gold and silver medals at he German National Championships. His career earnings totalled over €1.8million, ahead of Milton, and his offspring have won over €2.5million between them.

Sire - Furioso II was out of the great mare, Dame de Renville, who produced a series of wonderful horses when bred to Furioso xx. The first of these was Mexico, who while standing at the French National Stud of Le Pin, sired 20 approved sons, 20 dams of stallions, and famous international showjumping horses, including Laeken, Jexico de Parc and Heur de Bratand. His son, Le Mexico, has been a hugely influential sire of jumping horses in Holland. Furioso II’s sire, the Thoroughbred Furioso xx, was born in England in 1939 and went on to be one of the most influential sires in modern performance horse breeding, even though he never won a single race in his 21 starts. Furioso xx was the leading sire of jumping horses in France from 1954-1961. His son, Lutteur B, who went on to win the 1964 Olympic individual gold for showjumping, amazed the German breeders when he appeared at the Hamburg Derby. Maas Hell, in Die Grossen Hengste Holsteins records the reaction: ‘The Germans were again amazed at how nonchalantly Lutteur B performed on the jumping course, how he played with the distances, and how, with a long neck, he left the course as though nothing had happened.’

Damline - Dam Gigantin was by Grannus out of a mare by Goya – she carries that ‘G’ blood that is so loved in Hanover: Grande, Grannus and Gotthard. Gigantin’s first foal, the stallion Winterstar (by Wittenberg) was sold to South Africa where he became a popular sire. For Pleasure's damline has produced multiple licensed stallions, many of these being sired by For Pleasure himself due to his breeder's tendency towards line-breeding back to the damline.

Progeny - For Pleasure's offspring speak for themselves. He has produced more than 80 grand prix jumpers, with 18 of these being licensed stallions; a total of 70 sons of For Pleasure sons have been approved by various studbooks. His offspring include Flora De Mariposa, Derly Chin De Muze, Fit For Fun, Firth Of Lorne, Forsyth, For Sale 6, Another Pleasure, Hello Forever, and Epleaser van't Heike.

He gives a great attitude, plenty of blood, scope and reflex; he is best suited to tall mares with elegant fronts.