A beautiful, modern stallion from an impeccable damline 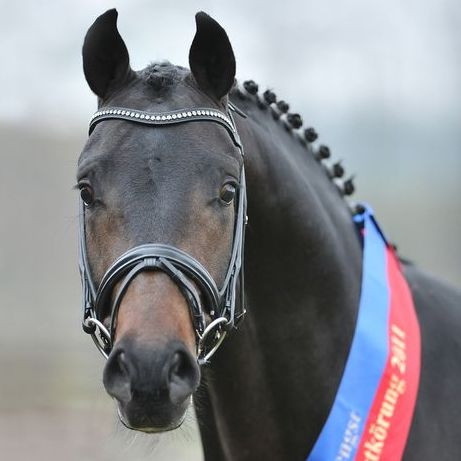 
Terms -  €1700+VAT, allowing unlimited attempts with chilled semen, on one named mare in one breeding season. If the mare is certified not in foal before the end of September then €1400+VAT will be refunded.

About - For Romance is the epitome of a modern sire, and is from a very successful dam line that has had  great success. Blessed with three excellent gaits, his canter and trot can only be described with superlatives and his character is also noteworthy. He stood out brilliantly in the strong lot of stallions at the 2011 Oldenburg Verband licensing and the enthusiastic spectators in Vechta gave him standing ovations.

Performance - Having been pronounced Champion Stallion of his licensing in 2011, For Romance did not disappoint during his 30-day test in Schlieckau, passing with super scores. He received a 9.25 for his trot and rideability, a 9.0 for his canter and an 8.88 for character. He won his first advanced level dressage classes as a seven-year-old and competed in the final of the Nuerberger Burg Pokal. In 2012, For Romance's full sister Fasine took the Oldenburg Champion Mare title - a brother and sister winning both these titles is a feat that is so far unique in the history of the Oldenburg Verband.

Sire - Fürst Romancier took fourth place at the World Championships for young dressage horses as well as at the National Championships, and received the Hauptprämie award from the Oldenburg Verband for the best first crop of foals. He is by the influential Fürst Heinrich, sire of double World Young Horse Champion Woodlander Farouche, out of a mare by Romancier, who competed to Inter I himself and is from the mare line of Ahlerich.

Damline - The damsire, Sir Donnerhall I, gained trademark status early on in his career. He was State Champion, the record-breaking winner of his stallion performance test, Vice World Champion of young dressage horses and Bundeschampion as well as the Hauptprämie winner. More than 50 of his sons have been licensed. In 2010, three of his progeny took Vice Bundeschampion titles in Warendorf; Silbermond - the NRW Champion Stallion, Appassionata, and the licensed Snap Shot. He has also sired numerous top auction horses.

For Romance's dam Gesina is in a league of her own. In addition to For Romance I and his full sister Fasine, she has also produced their full brother, premium stallion For Romance II, another premium stallion, Feinrich (by Fürst Heinrich), and the British national novice champion Best Of All (by Bordeaux). Few mares are so successful and For Romance represents one of the most proven families in modern sport horse breeding.

Progeny - More than ten of his sons from his first two years have been licensed; among them the second-reserve champion Federico Fellini, the premium stallions For Final, For Dance, Fortunatus, For Faible and Fine Romance, and the stallion performance test winner and Vice-State Champion Fidelio Royal. Among his premium mares are the Belgian Champion Mare Frey de Mars, and the Oldenburg brilliant ring mare Marutela. Florentina has achieved the top price of €200,000 at the Westphalian Riding Horse-Auction. In 2016 one of his colts’ placed sixth at the German Foal Championships. Funkenmarie won the Lodbergen Championship and was expensively auctioned off in Borculo/NED. Rosenstolz was the top-price foal at the foal auction in Münster-Handorf. In the UK, his son Force Majeure SFS was a BEF elite foal who was the reserve champion of the 2016 series.