Athletic son of For Pleasure with an unrivalled pedigree 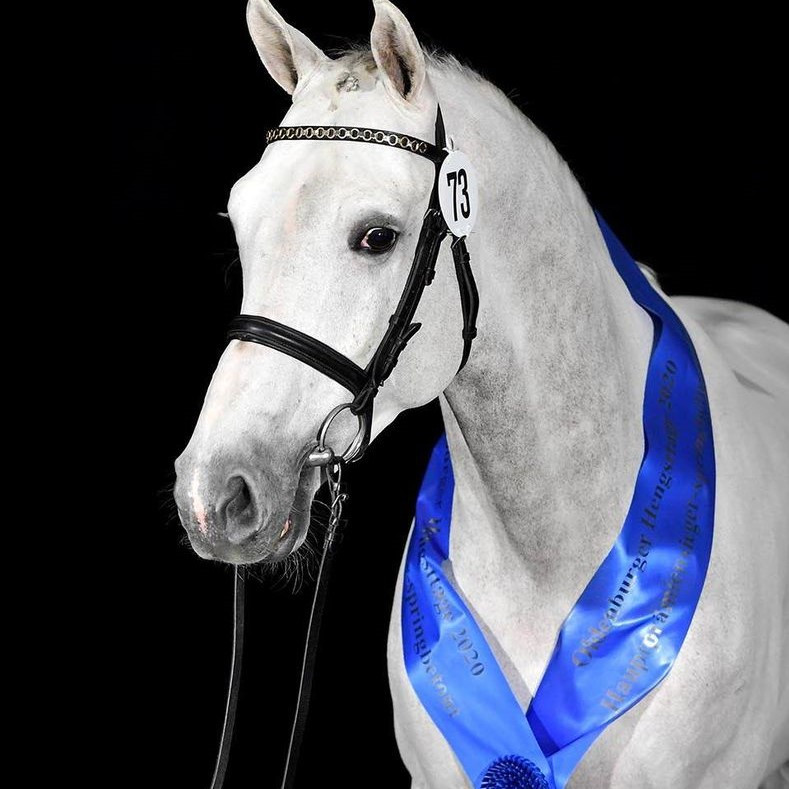 
Terms - €900+VAT for unlimited attempts with chilled or frozen semen (very limited supply), for one named mare in one breeding season. If the mare is certified not in foal by the end of September, €600+VAT will be refunded.

About & Performance- The undeniable crowd favourite of the 2018 Oldenburg licensing, For Treasure blew the crowds away with his light-footed athleticism, balance, scope, and power. Combined with his superior pedigree, with four grand prix stallions in a row, and his relaxed, easy attitude, these attributes saw him crowned premium stallion and reserve champion of the licensing; the first time a stallion with KWPN papers has earned this honour.

In 2020 For Treasure was awarded the Oldenburg Main Award of the year based off his high quality progeny,

Sire - For Pleasure has been described as the 'Horse of the Century'. With his suppleness, scope and attitude being reliably passed on to his foals, For Pleasure is in as much demand today as he was during the height of his career. He retired at the age of 20, having won his last ever class, the Leipzig World Cup qualifer, and having been sound for his whole career before a tendon injury aged 19. His international career was exceptional; he was on four gold-medal-winning teams for Germany; two Olympic Games (Atlanta 1996 & Sydney 2000, where they finsihed 4th individually), and two European Championships, at Hickstead in 1999 where he was 5th individually, and Donaueschingen in 2003. At Donauschingen, he also won individual bronze, the first ever individual medal for Marcus Ehning. He also won gold and silver medals at he German National Championships. His career earnings totalled over €1.8million, ahead of Milton, and his offspring have won over €2.5million between them.

Damline - For Treasure's damline has already produced the grand prix horses Onimo (by Animo) and Anemone's Vicky (by Krunch de Breve), in addition to the 1.50m jumping mare Engelien and several horses jumping at 1.40m level.

His damsire Carthago was the most influential son of the foundation sire Capitol I. He jumped in two Olympic Games with Jos Lansink, finishing 11th individually at Atlanta in 1996, jumped on winning Nations Cup teams in Rotterdam, Aachen and La Baule, and won numerous grands prix all over the globe. He has over 100 licensed sons, and over 150 offspring jumping at grand prix level. His progeny include Cicero Z, Old Chap Tame, Mylord Carthago, Davos, Cappucino, Cash 63 and Coltaire Z.

Third sire Ramiro Z jumped at grand prix himself, and sired a host of important horses for sport and breeding, among them the brilliant Ratina Z, who under Ludger Beerbaum won World Cup Finals, the European Championships, the Grand Prix of Aachen, individual Olympic Silver, double Olympic Team Gold, Team Gold at WEG, and twice team gold at the European championships. Ramiro's other notable offspring include Royal Bravour, Robin Z, and Japeloupe; a total of over 150 licensed sons and more than 60 grand prix horses.

Fourth sire Jasper also jumped at international grand prix, and adds the necessary blood to the pedigree through his Thoroughbred sire Courville, in conjunction with For Treasure's fifth sire, the influential Thoroughbred, Lucky Boy. Jasper and Lucky Boy between them produced more than 30 grand prix horses including Avontuur, It's The Business, Bonheur, Brown Boy, Neopolitan, and Elton.