Champion Stallion and top price of the Westphalian licensing 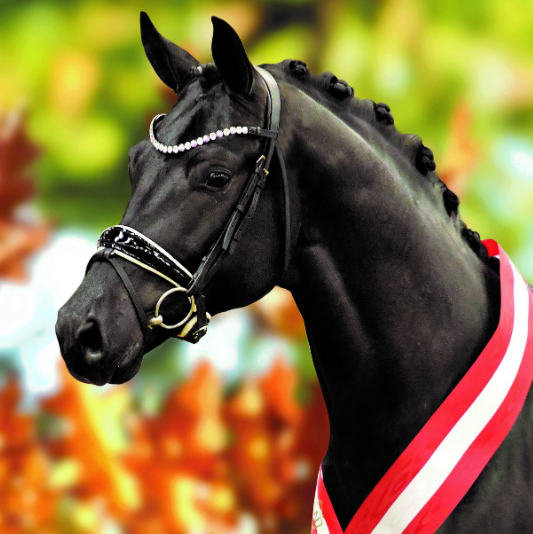 
Terms - €1000+VAT, allowing unlimited attempts with chilled semen, for one named mare in one breeding season. If the mare is certified not in foal before the end of September then a 50% credit applies the following year to spend on any stallion from the same stud.  If the first AI of the year is July 1st or later, the credit the following year is 100%.

Please note: Schockemöhle prioritise mares on site in Germany for chilled semen from their stallions, so popular stallions may be unavailable in the peak of the season with no notice. In this instance, frozen can be offered on the same terms for most stallions, but we advise that you also have a second-choice stallion in mind also standing at Schockemöhle, in case your first-choice stallion cannot be supplied

About & Performance - Forever Love is a beautiful and correct stallion, this top athlete has very good foundations for the future. In movement, he presents himself in an elegant and athletic way, during the lunge work, he left no doubt that he would be highly placed. The interim breeding manager of Westphalian, Thomas Münch, expressed his enthusiasm about Forever Love. The desire for this remarkable Westphalian Champion Stallion was therefore high and at 800,000 Euros, he became the stallion auction top price.

Sire - Fair Game completed his stallion performance tests in Neustadt/Dosse with 8.3 (for his 14-day-test) and 8.06 (for this 50-day-test). In 2018 and 2019, Fair Game qualified for the German Championships with victories in dressage young horse competitions. With the Westphalian Champion Stallion, he produced his first licensed son. One of his daughters was highly placed at the Regional Mare Show in Weilheim in the two-year-old class.

Damline - His dam Rock Z produced the German Sport Horse premium stallions Del Re and Davos (both by De Kooning), the latter was auctioned for 95,000 Euros. His grand-dam Romantica produced the licensed stallion Dream Diamond (by Desperados). His dam-sire Destano, a son of Desparados, Team World and European Champion and Olympic Champion ridden by Kristina Sprehe, has already conquered the Grand Prix arenas with Simone Pearce/AUT. The Oldenburg main premium winner has produced 25 licensed stallions.