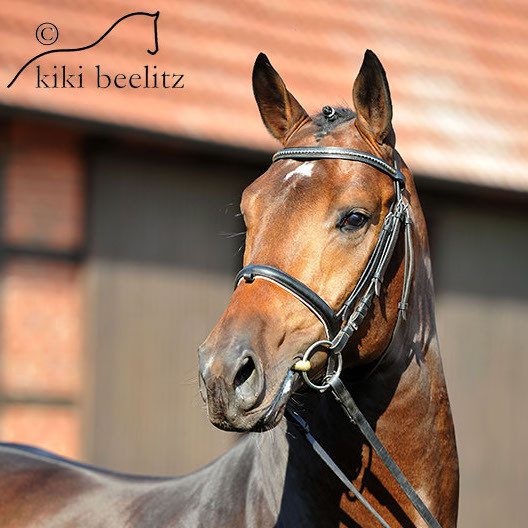 
Terms  - €1600+VAT, allowing unlimited attempts with chilled or frozen semen, for one named mare in one breeding season. If the mare is certified not pregnant before the end of September then a 50% credit applies to spend on a Schockemoehle / Helgstrand covering the following year. If the first AI of the year is July 1st or later, the credit the following year is 100%.

About - Foundation is a large-framed, immensely powerful stallion who is incredibly supple with elastic, uphill, and ground covering paces. The mechanics of his gaits are exquisite; at his performance test, he scored a 10 for both his trot and his canter.

Performance - In 2013, after many wins in L-level dressage classes, he qualified for the Bundeschampionat in Warendorf. In 2016, he achieved his international break-through, and with Matthias Alexander Rath, he is constantly victorious and highly placed at prix st georges and inter I level, including at Jerez de la Frontera, Nice, Majorca and Wiesbaden. In 2012, Foundation was awarded the dressage Hauptprämie from the Oldenburg Verband for the best first foal crop. At the end of 2018, Foundation made the step up to international grand prix with ease, scoring +69% at the Nice CDI3*. He was awarded the 2020 Grande Prize, a special award handed out annually by the Hanoverian Breed Society to a successful Hanoverian breeding stallion.

Sire - The celebrated 2004 NRW Champion Stallion, Fidertanz dominated his 30-day test in Neustadt-Dosse a year later and then took the Vice Champion title at the Bundeschampionat in Warendorf, with a score of 9.5 from the guest rider. In 2006 he was awarded the dressage Hauptprämie in Oldenburg in recognition of his outstanding first foal crop. In 2007, Fidertanz received a score of 8.8 in a qualifier for the Bundeschampionat and thus fulfilled the performance requirements for licensing. He meanwhile won up to Prix St. Georges and competed international grand prix under Antonio Do Vale.

Progeny - Numerous descendants have sold for top prices at foal auctions in Vechta and Verden. Meanwhile, 13 sons have been licensed with some distinguished as premium stallions. With his first offspring frequently victorious in ridden and dressage horse competitions, Foundation has already sired numerous highly placed Bundeschampionat finalists. The licensed Feuertanz was the 2016 Hanoverian Champion of three-year-old stallions in Verden, Ferrari was Oldenburg Champion of four-year-old stallions in Rastede and sold for the price of €1.5million, the PSI price record of the year. His daughter Feel Free was third in the Brillantring of the Oldenburg Elite Mare Show. Foundation also managed a dream start in the FN breeding value estimation index: 168 points and fourth place of all dressage stallions across Germany. Foundation was the sire of the winning 2020 Oldenburg stallion from the young horse licensing (Foundation x Quaterback).