A powerful, uphill stallion and winner of the Bundeschampionat 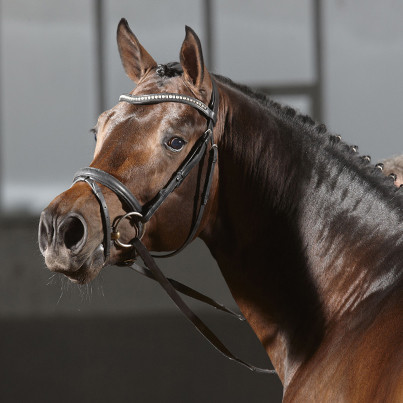 
Terms - €1300 + VAT for unlimited attempts with chilled semen, on one named mare in one breeding season. If the mare is certified not in foal by the end of September, a 50% credit applies the following season to use on any stallion from the same stud.

About - Franziskus is a tall, large-framed and immensely powerful stallion. He has outstanding movement, with an active, pushing hindleg and expressive front end. In an interview with The Horse Magazine, rider Ingrid Klimke said of Franziskus as a seven-year-old: "He has so much quality, everything is easy for him, so much power, and from his build he is so much sitting on his hindquarters, so uphill, everything is easy for him. I asked for a change, wonderful change, I asked, did anyone teach him changes? No. He can do one change, four, three, two times changes, now I teach him the ones, because I didn’t know what else to do.”

Performance - Franziskus impressed the spectators at the Westphalian licensing in 2010, and was awarded a premium. He had already won the qualification for the German Championships as a foal. Franziskus passed his performance test in Münster-Handorf successfully; he got scores of 9.0 for trot, canter and rideabilty, and 9.5 for his character. Franziskus continued on his successful path, winning the Bundeschampionat as a four-year-old. Ingrid Klimke began riding Franziskus at the end of 2013, and was victorious with him in his first young horse classes. He is now competing successfully at intermediate I, winning at Münster, and finished second in the Nürnberger Burg-Pokal Trophy, on a score of 9.5.

Sire - The celebrated 2004 NRW Champion Stallion, Fidertanz dominated his 30-day test in Neustadt-Dosse a year later and then took the Vice Champion title at the Bundeschampionat in Warendorf, with a score of 9.5 from the guest rider. In 2006 he was awarded the dressage Hauptprämie in Oldenburg in recognition of his outstanding first foal crop. In 2007, Fidertanz received a score of 8.8 in a qualifier for the Bundeschampionat and thus fulfilled the performance requirements for licensing. He meanwhile won up to Prix St. Georges and competed international grand prix under Antonio Do Vale.

Damsire - Damsire Alabaster competed up to prix st georges level after winning the five-year-old Bundeschampionat. His sire Akzent II is the damsire of the great De Niro. Alabaster produced 32 state premium mares, 60 elite auction candidates and 12 approved sons, including Isabell Werth's Apache and Hayley Beresford's Jaybee Alabaster. Third sire Rubinstein was a grand prix competitor himself and is the sire of countless successful horses including Rafurstinels, Relevant, Ravell, and Ratino H; in total more than 35 grand prix horses and more than 100 licensed stallions. Other stallions from this mareline include Zaigon (by Zack), Fürstbischof (by Fürst Romancier), Didi Van De Helle (by Diarado) and Cappucino van Berkenbroeck (by Contender), who is jumping at 1.40m level internationally.

Progeny - Franziskus has 12 licensed sons from his first three crops; an enviable record for any stallion. Among them is Formel Eins, a Westphalian premium stallion. His foals are modern, uphill types with good temperaments, and his son Fehrbellin was crowned the German Champion Foal in 2012.