Excellent in appearance and performance. 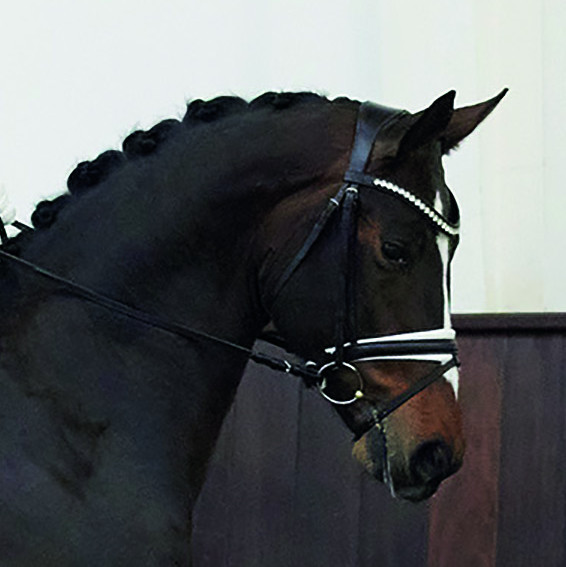 
Terms- €1000+VAT, allowing unlimited attempts with chilled, for one named mare in one breeding season. If the mare is certified not in foal before the end of September then a 50% credit applies the following year to spend on any stallion from the same stud. If the first AI of the year is July 1st or later, the credit the following year is 100%.

Sire - The sire Glamourdale became World Champion of seven-year-old dressage horses in 2018, having already placed in the World Championship Final of five-year-olds in 2016. With Charlotte Fry/GBR, he gained wins at international Grand Prix competitions. In Germany, seven of his licensed sons are registered, and the first offspring are winning dressage tests for young horses according to their age.

Dam - The dam is the Hann.Pr.St. Evita G, herself victorious in tests for young dressage horses under Marion Wiebusch. Dam sire, Escolar, is a member of the German Olympic squad with Hubertus Schmidt and has placed several times at German Championships. As a three- and four-year-old, he was the Bundeschampion of Riding Horses and as an eight-year-old, he placed second in the final of the Nuremberg Burg Cup. The St.Pr.St. Fürstin Hohenstein also produced other young dressage horses with successes in tests for young riding and dressage horses. In the following pedigree  the dressage horse world champion Fürst Heinrich and the Trakehner elite stallion and stallion of the year, Hohenstein also appear.

The third dam, St.Pr.St. Habanera, also produced the M** dressage horse Habanero Uno (by Hotline) and the mares Fürstin Lewitz (by Fürst Heinrich), the latter is dam of the international junior dressage horse and advanced (S) level dressage winner Springsteen (by. Sir Donnerhall I)/Emma Gömmer, as well as Fürstin Hohenstein III (by Fürst Heinrich), she became dam of the licensed and also in the international junior tour successful Fürst Furioso (by Bretton Woods).

The mare line also produced the licensed stallions Bernay (by Boston)/Simone Alexandra Pearce/AUS, Lord Leatherdale (by Lord Loxley I)/Charlotte Fry/GBR, Asgard's Impact (by Asgard's Ibiza), Economy (by. Escudo I), Goldjunge (by Grenadier), Granat (by Graf), Hogwart (by FAN Holland), Kojak (by Pit I), Lafon (by Laurentianer), Landro L (by Landadel), Liguster (by Leuchtfeuer) and others. The Grand Prix dressage horses High Noon (by Donnerhall)/Herbert Boger and Aventino (by Aalborg) stand out among the sport horses, as do the 1.60-meter show jumpers Le Patron (by Lord Liberty)/Rene Tebbel and Toni Haßmann, respectively, and Boyfriend (by Bariton)/Gerd Wiltfang.