Large-framed grand prix stallion from champion sires on both sides 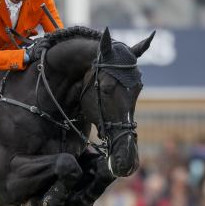 
Terms:  €1400+VAT for unlimited attempts on one named mare in one breeding season. If the mare is certified not in foal by the end of September, €1100+VAT will be refunded.

Chilled semen availability is dependant upon competition schedule - frozen can be sent on chilled terms.

About - Glasgow van't Merelsnest is a well-developed stallion with height and length and jumps with scope and care. He is a powerful and bold jumper, with a forward, balanced and rideable canter.

Performance - Glasgow van 't Merelnest has developed quickly into a top Grand Prix jumping stallion and with Jur Vrieling he won the Grand Prix of Rome and the Helsinki World Cup. In 2019 the highlight was his victory with the Dutch team in the Longines Nations Cup final of Barcelona where Glasgow jumped two fantastic rounds in the final. In addition Glasgow van ‘t Merelsnest won the Nations Cup in Falsterbo by jumping three clear rounds and jumped with the Dutch team to a 2nd place in Hickstead and a 4th place in Drammen.

Sire - Glasgow van 't Merelsnest is an exceptional and interestingly bred stallion. Sire Nabab de Rêve and grand sire Darco have both had successful careers in Grand Prix competitions including World Cups and World Championships. They are fathers to top horses like Sapphire and the World Champion Vigo d'Arsouilles. Nabab de Reve is a grandson of the influential Jalisco B and has more than 50 licensed sons, among them Glock's London, Kashmir van Schuttershof and Gitano V Berkenbroeck.

Progeny - His first foal crops are well developed and jump well. They have a great canter and lots of scope. Sensation Tok became Brazilian champion of the colts in the age group of 12 to 18 months. In 2013 Hiralinde DN was Champion of the Jumper Foals in Westhoek. Several foals were sold for high prices at foal auctions. He has a licensed son, Gambler Z, and his oldest offspring are now emerging successfully onto the international stage.