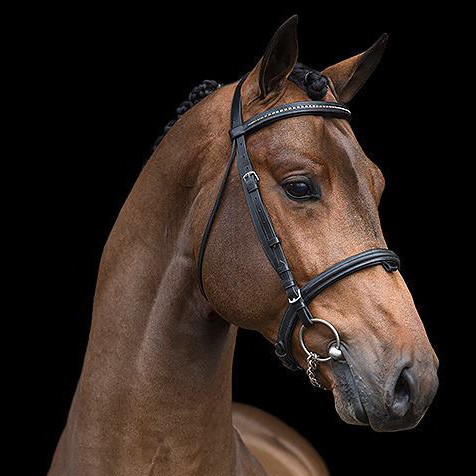 
Terms:  €900+VAT for unlimited attempts with frozen semen, for one named mare in one breeding season. If the mare is certified not in foal by the end of September, €600+VAT will be refunded.

About - Glenfiddich is a well-developed stallion with lots of scope, a great technique and jumping intelligence. He canters with a great deal of power. Glenfiddich is a very tall, large-framed stallion who may not be best-suited to a really tall mare, but could be used to add height to smaller mares. He has an exceptionally kind, friendly temperament and very good rideability.

Performance - He completed good KWPN Stallion Test; in total he scored 79 points, including 8.5 for his scope and 8's for his paces. Glenfiddich's sporting career has been delayed by injury but we are now excited to follow him in competition in 2017.

Sire - He is the only licensed son of Bacardi VDL, who won the silver medal at the World Championships for seven years old jumpers in Lanaken 2013 under Jos Lansink. Bacardi now competes internationally for Switzerland under Janika Sprunger, recording success at international 1.45m level. He combines the two grand prix jumpers Corland and Kannan, both exception sires in their own right, and along with his full brother Apardi, is the only stallion to offer this combination.

Damline - On the other side of Glenfiddich's pedigree we find Corrado I, Nimmerdor and Jalisco B, all of whom jumped at the highest level and are found in the pedigrees of many exceptional showjumpers, among them Corradina, Heartbreaker and Quidam de Revel. Nimmerdor is the damsire of Rio 2016 Olympic gold medallist Big Star. Glenfiddich finds his origins in one of France's best dam lines. From this line comes, among others, the Olympic stallion Papillon Rouge - who is the full-brother to Glenfiddich's great-grand-dam Olivia Rouge. Glenfiddich's dam, Tolivia, was awarded "Elite" and "Prestatie" and grand dam, Nolivia, is "Keur" and "Preferent", producing the 1.45m show jumper Volivia VDL. Several famous horses from this dam line are Bleu Blanc Rouge, Saphin Rouge, Quartz Rouge.

Progeny - Glenfiddich's first foals are appealing and well-developed foals. His foals have a strong top line and have a powerful gallop with plenty of space, flexibility and balance. His first sons will appear for licensing from 2017.