A modern, elegant stallion from an elite damline 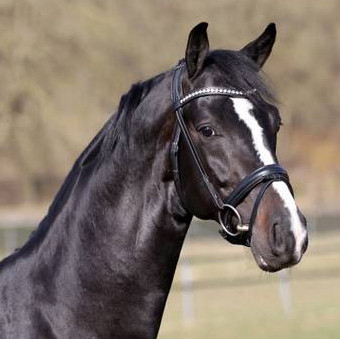 
Terms -  €1100+VAT for unlimited attempts with chilled semen, for one named mare in one breeding season. If the mare is certified not in foal by the end of September, €550+VAT will be refunded.

About & Performance - Goldberg's career started with a bang. In 2011 Goldberg was the top foal at the NL foal auction in Dronten. In 2013 he was a celebrated star at the Westphalian licensing in Münster-Handorf, which he left as the second reserve winner. He completed the 30-day test in Neustadt (Dosse) with a final grade of 8.52. After victories in riding and dressage tests, he is now a multiple S winner under Hubertus Schmidt and made his international debut in 2019. In Verden, the couple won the Prix St. Georges Spécial with 73.97 percent. Goldberg immediately ranked in the top 1% in the breeding value assessment, due to the great success of his offspring in basic and advanced tests.

Sire - Amazing Star was has been internationally successful up to Grand Prix for Japan under Takayoshi Makino and has been drawn exceptionally well by the heroic sires Flemmingh, Ferro and Donnerhall, all of whom have played an important role in international dressage. He was the Pavo Cup champion in 2010 in Ermelo under Theo Hanzon. Second sire Flemmingh has offspring competing internationally all over the world such as Lingh, ridden by Edward Gal, won several Grand Prix and was Reserve Champion at the World Cup Final in Las Vegas, where he was the crowd favourite. He won and was placed in several other Grand Prix and World Cup qualifiers. He was also a member of the Dutch team at the European Championship.

Damline - Dam Whoopy Goldberg, delivered the Coco Chanel, who was victorious up to Intermédiaire I. His dam's sire San Remo brings in the very best blood from Hanover and Oldenburg through Wolkentanz I and Volturno, guaranteeing rideability and performance. Proven show jumper makers such as actor and Lucky Boy xx in the back generations are indicators of power and motor. Goldberg represents the "NL-merrielijn 166"