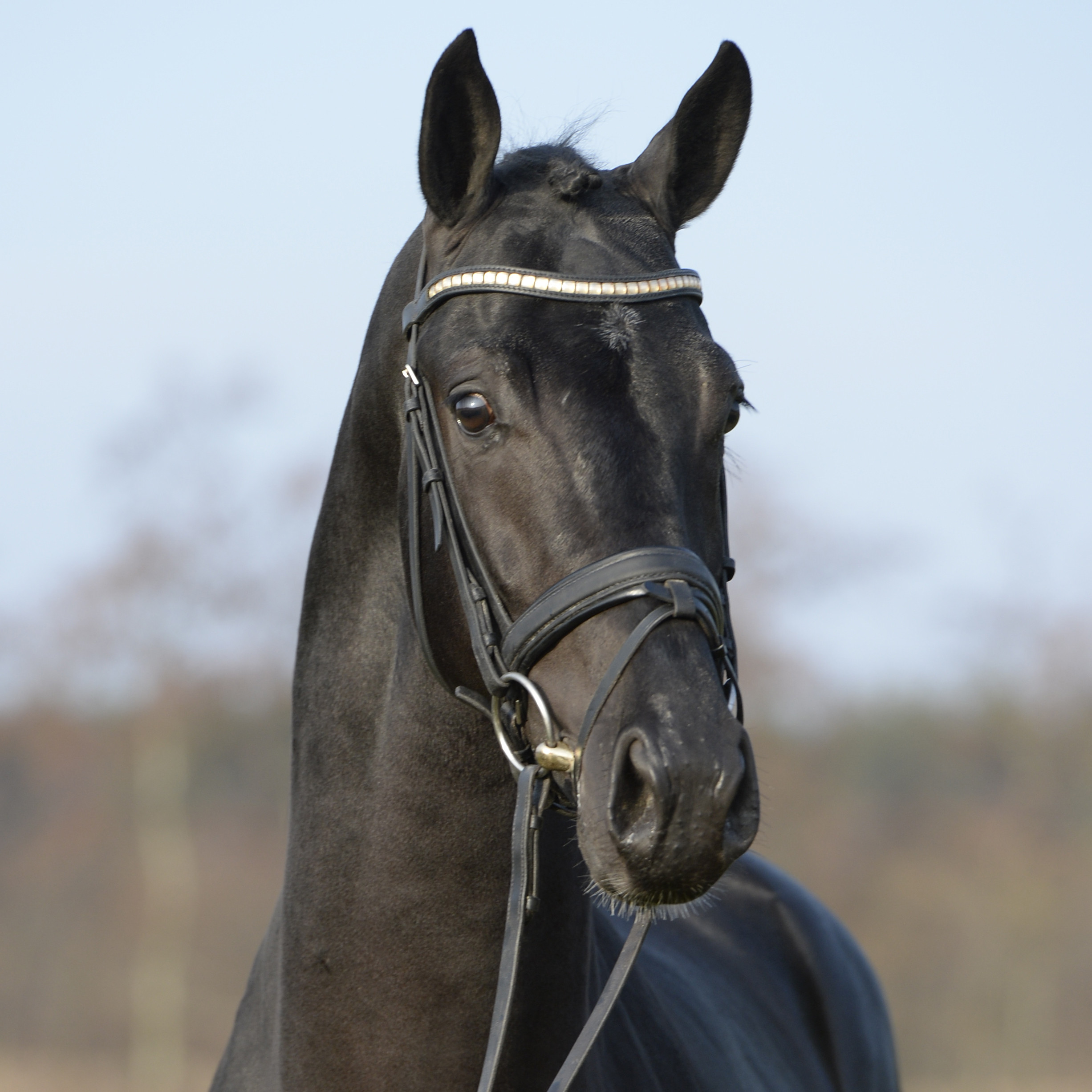 
Terms: €750+VAT per dose, allowing the registration of one foal. There is no refund or credit due in the event that the mare is not pregnant.

About - This beautiful, ultra-modern young stallion was described by the breeding committee as "a masculine, long-legged stallion with a lovely, open frame. His movements are powerful, roomy and supple with great self-carriage". Formerly known as Galaxy Win T, he is a good choice for old fashioned mares, adding height and length of leg. His elasticity means he can complement stuffy or short-coupled mares, as well as injecting a flexible and uphill frame with a strong but supple topline. He has hugely supple and expressive movement and a trainable outlook. He is the first stallion in Denmark by Apache, who had six sons selected for the 2015 KWPN licensing in Holland.

Performance - Grand Galaxy Win was the champion of the Danish licensing in 2014, and in 2016 he finished 7th in the final of the five-year-old World Breeding Championships at Ermelo under Olympic rider Severo Jurado Lopez, stable jockey for Andreas Helgstrand, on a score of 84.6.

Sire - He is by the grand prix stallion Apache, who has impressed in his first season at international grand prix under the Netherlands' Emmelie Scholtens, never scoring below 71%. After their first international at big tour, they were immediately cited as contenders for the Dutch Rio Olympic team, narrowly missing out on a place. Apache brings in a second dose of Jazz via his grand-sire Olivi, a Jazz son who also competed at grand prix. Jazz led the WBFSH Sire Rankings for four consecutive seasons, and has never been out of the top 10 in the current system - he is a legend in his own lifetime and has produced scores of grand prix horses. He was a grand prix competitor himself, and then went on to produce the likes of Parzival and Wynton. Jazz produces sensitive but trainable horses for dressage - and even the Dutch Olympic eventer Vira.

Damline - Galaxy's elite dam Winner T has produced elite, ster and IBOP offspring. She is by the dressage legend Jazz out of a Zeoliet mare, who brings the jumping blood of Ramiro Z into the mix. Zeoliet, who is the sire of numerous grand prix horses, backs up Galaxy's pedigree. Winner T is also the full sister of the successful small tour horse Volvo.

Progeny - His foals have been much admired for their uphill tendency and freedom of movement. He provided the winner of the 2018 Oldenburg licensing, Global Player, and his first offspring under saddle are proving to be talented, trainable and rideable with all the potential for the top level work.