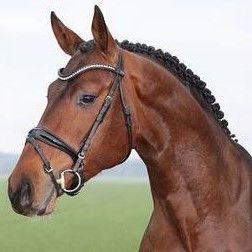 
Terms: €900 + VAT for unlimited attempts with chilled semen, for one named mare in one breeding season. If the mare is certified not in foal before the end of September, €500 +VAT will be refunded.

About & Performance -  Elegant, harmonious young stallion of high sporting excellence. The sequence of movements is unmistakably marked by his father Hickstead White. With a lot of mechanics and a hind leg that is always powerfully active, the trot and canter in particular are of enormous quality. Haaland's jumping sequence unites the modern quality of Hickstead White with the reflexes of his mother's father Stakkato and the strength and ability of the third generation of radiant Contender.

Sire - Sire Hickstead White is the only licensed son of the Olympic champion Hickstead on German soil and has already made several appearances in the international Youngster Tour. He has so far produced 15 licensed sons from three years, and offspring from his debut year made a strong impression in the first young horse classes in 2020. Hickstead White's dam Queentina was also victorious up to 1.60 m jumping.

Damline - Haaland's mother Sophia is also from the best family. Her father Stakkato was able to revolutionize Hanoverian show jumping breeding with his speed. He is the father of 240 successful advanced level jumpers and appears regularly as the dam's father of high quality show jumpers. His daughter Sophia also proved to be a first-class broodmare and previously bred Cornet Obolensky to the licensed Cohinoor (PB NL), who was successful in 1.45 m jumping under James Billington. The Neustädter premium stallion Lanzardo (by L'Unico) is Sophia's third licensed son.

Haaland's grandmother Candy is a daughter of the Holstein breeding hero Contender. With Lakeland (by Lordanos) and the licensed, 1.45 m successful Cornwall (by Cornet Obolensky), she brought two international show jumping horses. With Graf Grannus and Hessenstein, well-tried jumping genetics will continue to operate in the following generations. Haaland's line has already delivered world-class show jumpers in various breeding areas, as impressively demonstrated by the 1.60 m successful Tyra (Yann Candele), Happydam (Jamie Wingrove) and Call me Number One (Linn Zakariasson and Richie Moloney).