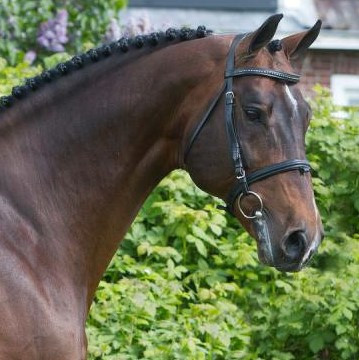 
Terms - €2000+VAT for unlimited attempts with chilled semen, for one named mare in one breeding season. If the the mare is certified not in foal by the end of September, €1700+VAT will be refunded.

About - Retiring to stud after a glittering international career, Hardrock Z is a fantastic addition to the VDL line-up. He is a dynamic, powerful stallion with scope, size, energy, and elasticity. Hardrock was seized by US and Venezuelan authorities in November 2018 during a fraud investigation against Emanuel Andrade's father, and he was the price highlight of the ensuing auction, selling for over $282,000.

Performance - In 140 international appearances, Hardrock has represent six different nations during his career, a testament to his trainability and rideability. Under Venezuela's Emanuele Andrade, Hardrock competed at the 2014 World Equestrian Games, the 2016 Rio Olympics, and placed sixth indiviually at the 2015 Pan American Games, where he won the first qualifying competition. He was 5th in the 1.60m Nations Cup GP in Tryon, 5th in the Barcelona Nations Cup Final, and 4th in the 1.50m GCT class in Miami.

Sire - Heartbreaker was declared ‘Preferent’ in 2009 in recognition of his hugely successful offspring in the international scene. Heartbreaker himself was successful at grand prix level with Peter Geerink, and appeared on the WBFSH Sire Rankings for seven consecutive seasons (2009 - 2015). His influence in worldwide breeding is enormous. In the KWPN-studbook he has 10 approved sons and 14 approved grandsons. On the international scene, many of his offspring are competing at the highest level, including Bertram Allen’s Romanov II, who won four grands prix (Bordeaux, Dortmund, La Baule and Paris) in 2016. Also among his offspring are Zidane, ridden by Leopold van Asten, the approved stallions Cidane, Toulon, Zambesi and Actionbreaker, and Halifax van het Kluizebos, who has exploded onto the international scene in recent seasons and led the world rankings for several months. Heartbreaker is also the grandfather of World Young Horse Champion Earley (Harley VDL x Indorado x Indoctro VDL), but by far his best-known grandson is undoubtedly the prolific winner Hello Sanctos, by Quasimodo van de Molendreef. Team gold medallist (and individual fifth) at London 2012, Sanctos and Scott Brash made history in 2015 as the first (and only) winner of the Rolex Grand Slam of Showjumping; consecutive victories in the world's three most prestigious grands prix of Aachen, Geneva and Spruce Meadows, for a bonus of €1,000,000. Sanctos has also won six GCT Grands Prix, and Scott was twice winner of the GCT Global Champions Tour, largely thanks to the phenomenal success of this top horse. The pair have also won World Cup qualifiers in Wellington and Oslo, the Rolex IRJC Top Ten Final, and an individual bronze medal at the 2013 Europeans.

Third sire Rebel I Z is the full brother of the outstanding Ratina Z, who is perhaps the one of the most famous and most spectacular jumpers of all time. She won back-to-back team golds at the Barcelona and Atlanta Olympic Games with two different riders, and also took home individual silver from Barcelona. She won the World Cup in 1993 and the Grand Prix of Aachen in 1996, team gold at the World Championships in Den Haag in 1994 and double gold at the European Championships in Mannheim 1997. Such was her prowess that she was one of the first horses to be cloned - there are three Ratina Z clones currently being used for breeding. Their sire Ramiro Z was not only a hugely successful competitor in his own right, but also has more than 60 licensed sons.

Progeny - Hardrock's availability has been limited by his sport career, but he already has a 1.60m grand prix-jumping son in Hangstone JT Z, and several international offspring including Hurrycane, Hailey AD, Heartbeat J&J Z, and Harakiri Z, plus the CCI2* eventer Cooley Rockmaster. His offspring are like him in type, and jump with the same power, spring, and enthusiasm as their father.