A bold, powerful son of Heartbreaker 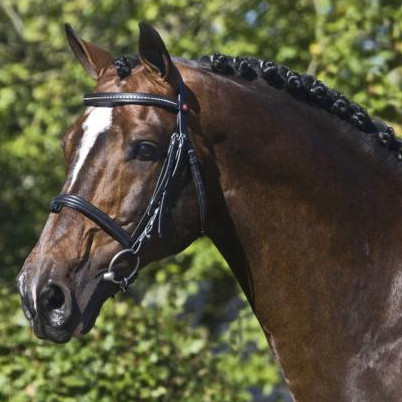 
Terms: €1800+VAT for unlimited attempts with chilled or frozen semen, for one named mare in one breeding season. If the mare certified is not in foal by the end of September, €1500+VAT will be refunded.

About - Harley VDL jumps with willingness, power and technique. He is bold, willing and extremely quick in the air. Harley's pedigree is among the best for sport and breeding. His sire line contains three international jumping stallions in a row: Heartbreaker, Carthago and Caletto I.

Performance - He had exemplary show results with Jessica Kuerten. At the KWPN stallion licensing in 's-Hertogenbosch he won the VHO Trophy, and at the same show he won the 1.35m Stallion Championship. He has also won international classes at La Coruna, Aalst and Gelderland. He was second in the Sainte Cecile Grand Prix and took third place in the Neurenberg Grand Prix.

Sire - Heartbreaker is a foundation sire and one of the greatest sons of Nimmerdor. He was elected as 2015 KWPN Horse of the Year, even against the likes of Valegro and Zenith. He has been phenomenally successful as both a sire and damsire; some of the most famous of his 100 licensed sons are Quasimodo vd Molendreef (sire of Hello Sanctos), Toulon, and Action-Breaker, and he is the damsire of Cornet Obolensky, Consul DL Vie Z, and Utrillo van de Heffinck, to name but a few.

Damline - The dam, Larthago, won several 1.40m and 1.50m classes during her career, and is also the dam of the prolific jumping and eventing sire Cevin Z, who competes in 1.50m classes and is the sire of not only grand prix showjumpers, but also of Olympic-level eventing offspring (Borough Pennyz and Billy The Biz). Larthago has also produced Hopes Are High Z, who jumped at 1.50m level, and the 1.40m showjumper Uncle Sam. Her half sister produced Caritano Z, who is approved by the Zangersheide studbook. Damsire Carthago Z was the most influential son of the foundation sire Capitol I. He jumped in two Olympic Games with Jos Lansink, finishing 11th individually at Atlanta in 1996, jumped on winning Nations Cup teams in Rotterdam, Aachen and La Baule, and won numerous grands prix all over the globe. He has over 100 licensed sons, and over 150 offspring jumping at grand prix level. His progeny include Old Chap Tame, Mylord Carthago, Davos, Cappucino, Cash 63 and Coltaire Z. He is also the sire of a CCI4* eventer in Cadoc Z.

Progeny - His offspring jump with scope, are fast off the ground and have a very good technique. They are in great demand by agents and riders. In competition there are some striking results by his offspring: Carst VDL won multiple classes for five-year old jumpers during the WEF and was the highest-ranked five-year old jumper of the USEF rankings. His oldest crops are already successful at international level; Harley's Hero VT won the Grand Prix of Wiener Neustadt, Harley David won a Grand Prix in New York, Arlando was 4th in the GP Geesteren and won the Nations Cup in Drammen. Camelot was 5th in the GP Roosendaal, Cupid was 7th in the GP Drammen and Hidalgo was 6th and 9th in the GP Verona. Cupido finished 6th In the Dutch Championship of 5 year olds and with a sale price of €200,000 he was the price highlight of the Dutch Sport Horse Sales, while Harley's daughter Cloe was sold in the same auction for €165.000.