Herakles is an impressive model of his successful sire, with talented scope and rideability. 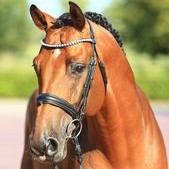 
Terms- €1000 + VAT for unlimited attempts with chilled semen, on one named mare in one breeding season. If the mare is certified not in foal before the end of September, a 100% credit will apply for the following season to use on any stallion from the same stud.

About - Herakles takes after his sire Catoki who competed successfully at world cups, he was licensed in 2015 at the Dutch KWPN Association in s'Hertogenbosch. At the age of five he had a win at the World Championships for young show jumpers in Lanaken.

Performance -  He was victorious at the international show in Opglabbeek and was crowned Vice Champion of the 6-year-old stallions of the KWPN Verband. He successfully completed the entire tournament series and was second overall in the important 2017/2018 stallion competition. In 2019 Herakles placed at S-level and qualified for the Bundeschampionat for seven-year old show jumpers.

Sire - Catoki has won and competed many shows at Grand Prix all over the world. He was awarded the Weser-Ems Champion and also participated in the Bundeschampionat as a finalist as a five and six year old. When competing FEI Catoki was fautless and in all classes finished third twice.

Dam Sire- Landor S was a talented stallion regarding his career, he was Bundeschampion of the 6 year old jumpers in 1997 and was titled Oldenburg 'Sire of the year' with his successful showjumping career at 1.50m. His talent is in his offspring, having produced over 40 licensed sons he is known as an outstanding sire of international showjumpers and is capable of producing champions.