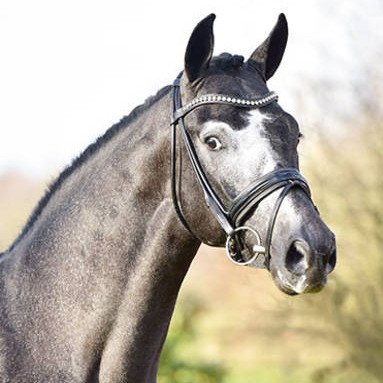 
Terms - €1250 + VAT for unlimited attempts with chilled semen on one named mare for one breeding season. If the mare is certified not in foal by the end of September, €750 +VAT will be refunded.

About - Hickstead White is the only licensed son of Olympic Champion Hickstead available in Germany. He demonstrates outstanding ability in view of technique, bascule, power and scope, and is blessed with an absolutely excellent jumping pedigree.

Performance - Hickstead White won the jumping section of his performance test and went on to win the overall championship. He has been successfully jumping at stallion shows and young horse classes, and is an exciting sport prospect.

Sire - His sire Hickstead won more than €1.5million in prize money under Canadian Eric Lamaze, and the highlight of his career was individual Olympic gold and team silver in Hong Kong 2008. He also won World individual bronze and Pan Am individual bronze and team silver (2010 Kentucky & 2007 Rio respectively). In 2007 Hickstead and Eric Lamaze won the coveted $1Million CN International at the Spruce Meadows Masters Tournament in Calgary. At the 2011 Spruce Meadows meeting, Hickstead jumped in seven classes; he won three of them, and was second, fourth twice, and tenth in the other four. He won the Queen Elizabeth II Cup a record four times, and won more than 30 international grands prix during his career, which was tragically cut short in his prime.

Damline - The dam Queentina was reserve champion mare at the Brilliantring in Rastede in 2011, and finished her mare performance test with a score of 10.0 for loose-jumping. With Tobias Meyer she won the K&K Cup 2015 in Münster, where they were placed first in both qualifiers for the international Young Horse Trophy, and then won the final. She continued to jump successfully at international 1.50m level. Damsire Coupe de Coeur and René Tebbel became German Champions twice, in 2006 and 2007, won the World Cup show jumping in Oslo and lead the German team to the victory in the Nations Cup Super League Final in Barcelona with two clear rounds. Third sire Quidam's Rubin was a stallion performance test winner and produced, in just a short breeder career, more than 30 licensed sons as well as 170 successful advanced level show jumpers.

Progeny - Hickstead White's foals have been much admired, and he was awarded the 2016 Oldenburg Hauptprämie in recognition of his outstanding first foal crop.