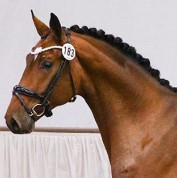 
Terms: €1000+VAT for unlimited attempts with frozen semen for one breeding season.  If the mare is certified not in foal before the end of September then you get a 50% credit the following year. If the first AI of the year was 1st July or later, then the credit in the event of non-pregnancy is 100%.

About & Performance - Homerun is a very special stallion for breeders. He combines the spectacular freedom of shoulder, natural balance and powerful dynamics with the large frame, basic paces and elegance of movement of the warmblood breed, whereby Henkie, Sir Donnerhall and Rohdiamant, probably the most outstanding representatives in direct succession, determine the pedigree of Homerun.

Sir Donnerhall was second reserve at his licensing, won his performance test and was awarded his generation's Hauptprämire, awarded for the best first crop of foals sired by stallions licensed in the same year. In 2006, Sir Donnerhall was five-year-old Bundeschampion, and went on to be Vice World Young Horse Champion. The German FN breeding valuation ranks Sir Donnerhall I, who has himself been trained up to Grand Prix, as one of the best sires of dressage horses, with 150 points and 99% reliability for youngsters, and 135 points and 97% reliability for sport horses.