In My Mind: A modern sports horse with an interesting pedigree! 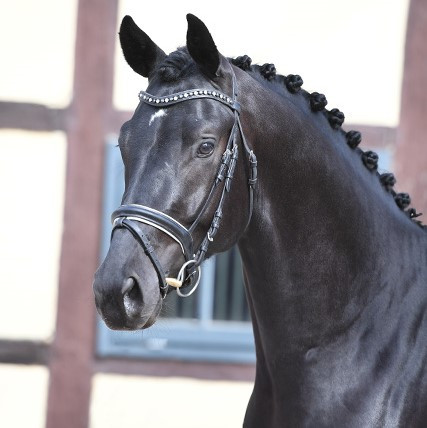 
Terms - Chilled semen €1000 + VAT, allowing unlimited attempts within the season on one named mare. If the mare is certified not pregnant by the end of September, then a 50% credit applies the following year to spend on any stallion from the same stud. If the first AI of the year is July 1st or later, the credit the following year is 100%. If the following year also results in no foal, the credit for the next year will be 50% or 100% (depending on the date) of the top-up fee paid in the second year only.

Also available frozen at €550 per dose, sold without terms - please enquire for details.

About & Performance - This son of Asgard's lbiza is beautiful, elegant and jet-black. He impressed at the Westphalian licensing in Münster-Handorf with his impressive movements at the lunge line and loose. His sire is the premium champion stallion who passes on his flashy paces which In My Mind demonstrates having won over crowds, he is a top breeding prospect. In 2020 he became Vice Champion of Westphalian licensing and qualified for the German National Young Horse Championships. He passed his 35-day performance test with the impressive total score of 852 points and received a 9.0 for rideability twice!

Sire - Asgard's Ibiza was the star in 2016, premium champion in Vechta in 2017, runner-up in the Pavo Cup qualifying and fifth in the final in 2018. At the World Championships of the Young Dressage Horses he won the small final and placed sixth in the final with rider Juliane Burfeind. His first year of foals drew attention at last years licensing and provided many licensed sons.

Damline - On the mothers side, In My Mind carries the proven blood of Fidermark through Farameh in combination with Discovery by Davignon, who provided licensed stallion Balesteros by Bellissimo, who is internationaly successful on Intermédiaire ll level. His damsire  Furthermore, the dam line provided licensed stallion Anpfiff and many more successful dressage and jumping horses. Full of type, with overview and aplomb, In My Mind elated us from the first moment.