A living legend and proven sire of grand prix horses 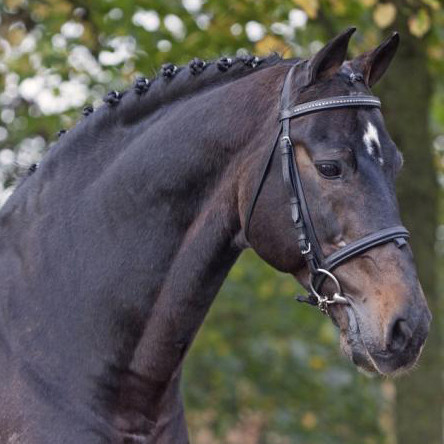 
Terms:  €1500+VAT, allowing unlimited attempts with frozen semen, for one named mare in one breeding season. If the mare is certified not in foal by the end of September, €1200+VAT will be refunded.

About - Indoctro is a living legend and is among the world's best sires. His offspring achieve successes at the highest level. At the Olympic Games in 2008, three horses by Indoctro attended: VDL Orestus, Don Porfirio and Picolien Zeldenrust. In Holland he is known as VDL Indoctro, while in Germany, following the Holstein naming custom, he is C-Indoctro. By any name he is one of the world’s most successful jumping sires. The 27-year-old is still available chilled in 2017, with excellent semen quality and very high rates of pregnancy.

Performance - After being Champion of his stallion test, Indoctro went on to a successful international jumping career with Ulrich Kirchhoff. His main value has been as a breeding stallion, standing as one of VDL's foundation sires. Indoctro has been such a success as a sire for the KWPN studbook, that at the age of 16 he received the title: ‘Preferent’.

Sire - Indoctro is another hugely successful Capitol I/Caletto II cross. Capitol I is a real rarity in the ranks of Holsteiner stallions – a showjumping sire, whose name begins with ‘C’, who is not related to Cor de la Bryère! Nor for that matter, is he related to that other pillar of Holsteiner breeding, Landgraf, which means he adds variety into any breeding programme founded on those lines. Capitol's grand-dam Vase was champion mare of Holstein, while her full-brother, Roman, topped the German showjumping standings for two years running with Hans-Gunter Winkler. Vase’s daughter, Folia, by Maximus (himself an advanced showjumper), foaled five stallions: Latus I and II (both by Landgraf), and then Capitol. Capitol was by Capitano, who is by Corporal out of Retina. Retina won the Hamburg Derby with Fritz Thiedemann in the saddle.