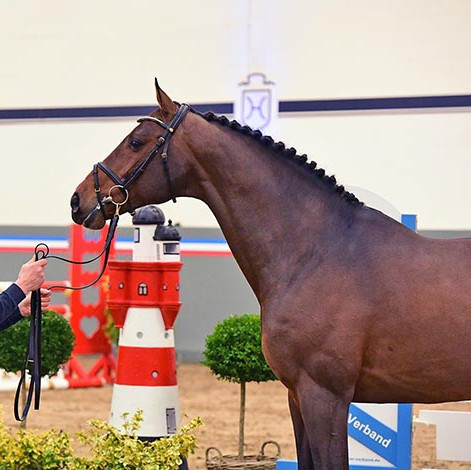 
Terms- €800 +VAT for unlimited attempts with chilled semen on one named mare in one breeding season, if the mare is certified not in foal by the end of September €450 +VAT will be refunded.

About- Innenminister is a thoroughbred stallion with great potential to become a successful sire of sport horses suited for eventing or jumping. Innenminister comes from TB mare family , with  achievements of this mare family in competition. Breeding advice for this stallion; To breed for show jumping offspring, the mare should be a careful and scopey jumper with a ground-covering canter.

Sire- As a race horse, Masterstroke won group 2 races and finished third in the prestigious Prix de l'Arc de Triomphe. Due to his good own performance on the track he was put to stud in France where he proved successful. The stallion’s genetic potential has been recognized and he is widely held in great esteem. Masterstroke’s sire, Monsun is one of few German stallion to obtain global standing in the past years. He performed convincingly on the flat with a track record of 12 wins out of 25 races and total life earnings of 1,067,881 euros. He was awarded the title galloper of the year in 1993.

Masterstroke’s damline;the Schlenderhan mare family of Asterblüte have already been among the best of the best in German TB breeding. This damline has become extremely popular in TB breeding these past years and have produced some of the best European TB stallions - Galileo, Sea the Stars, Adlerflug, Tertullian, Black Sam Bellamy – in close succession.

Damline-   Dam Intschu Tschuna has outstanding services to racing and warmblood breeding in equal measure. Her produce includes the TB eventers Incredible and Ideal. Her sire Lando is bred by Acatenango– Surumu– Literat– Birkhahn, combining icons of German TB breeding tracing back directly to Dark Ronald where he carries seven Derby winners in the 8 generations.

Lando being the first German horse to win the Japan Cup is considered a landmark achievement. He even surpasses his sire Acatenango with regard to the extraordinary amount of his life earnings and is probably one of the best of his sire’s sons. Lando sired several black type group I hurdlers, including the outstanding Air Force One (winner Punchestown), Sharstar (3x group 1 in Italy), Qualando (group 3 Cheltenham) and Fox Norton (group race winner at Cheltenham, Punchestown and Aintree 2017).

Lando has had a positive influence on warmblood breeding, even though he was only moderately used. As much as 18 of his direct TB offspring have been shown in competition off the track. Moreover, Lando was also bred to warmblood mares, resulting in a partbred son (damsire Aloubet Z) with showjumping results to S level and a Trakehner with results to M level dressage.