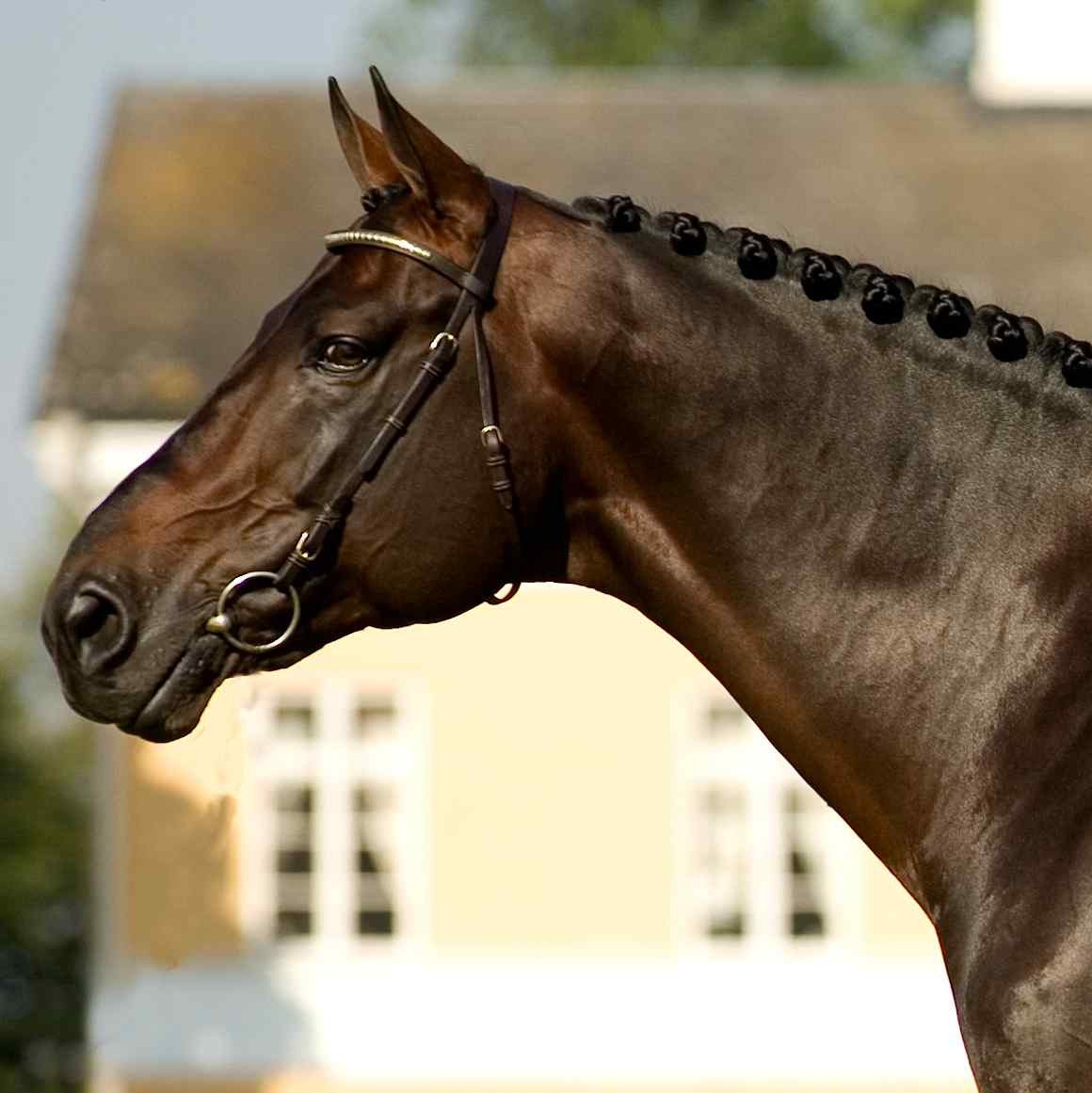 
Terms - €1700+VAT, for unlimited attempts with frozen semen, for one named mare in one breeding season. If the mare is certified not in foal by the end of the season, €1200+VAT will be refunded.

If the mare is certified in foal, but subsequently dies, aborts or reabsorbs the foal, or the foal dies before 48 hours old, a 100% credit will apply for the following season which can be used on any mare.

About - Jaguar Mail is a big, noble stallion, with almost entirely (+82%) Thoroughbred bloodlines in his pedigree.  His jumping is characterized by his scope and rideability, and his international career has been exceptional.

Performance - Under Patrice Deleveau, he had placings at both the French Championships and the World Breeding Championships for young horses. At 7 years old, Jaguar began competing at Grand Prix, and by the following year was already on the WBFSH rankings. In 2007 Jaguar Mail moved to Sweden and began his partnership with Peter Eriksson. After just two months together, the pair placed second at the Swedish Championships and later that year won the “Sires of the World” competition in Lanaken. The following year, Jaguar Mail and Peter were important members of the Swedish Nations Cup teams with placings in Gothenburg, Rotterdam, and Falsterbo. At the 2008 Olympic Games in Hong Kong, the Swedish team placed fifth overall, and Jaguar Mail was 33rd in the Individual Final. In 2010 Jaguar Mail was paired with the young rider Margaux Rocuet. Together they won the French Young Rider Championships in July, were 8th in the Ladies Championships in September, and won several grands prix.

Sire - Jaguar Mail’s sire is the magnificent thoroughbred Hand In Glove, who had an exceptional, multi-discipline sport career.  Only lightly raced, Hand In Glove was developed as a dressage horse up to the Prix St. Georges level and as a show jumper, competing at the Grand Prix level. Hand in Glove was accepted by 15 different studbooks and has produced international winners for both show jumping and eventing including Famoso Mail, Frisco Mail, Free Style, and Ikat Mail. Grandsire Best Turn was stationed at the legendary Calumet Farm. He won 15 of his 28 races and sired 24 Stakes winners. He was also a very successful sport horse sire, with his progeny including the International show jumper MVP and the FEI dressage horse Shining Moment.

Damline - Jaguar Mail’s dam, Elvira Mail, is a daughter of another Thoroughbred sport stallion, Laudanum. Described as careful and courageous, Laudanum was a winner of Grand Prix, Puissance, and Nations Cup classes and earned over 100,000 French Francs with Pierre Durand. Elvira Mail has also produced grand prix mare and WEG silver medallist Katchina Mail, who won the Stuttgart Masters, the HOYS grand prix, and finished 11th at the Geneva World Cup Final. Among Elvira's other offspring are the 1.45m international jumper Loren Mail and the licensed stallion Ulgar Mail, while Katchina is in turn the dam of 1.45m jumper Sheena Mail and the licensed stallion Catchar Mail.

Progeny - Jaguar Mail's offspring are sought-after all over the world; he is the leading sire of eventers in France and is currently ranked 2nd in the WBFSH Sire Rankings for 2018. His most successful offspring include FischerTakinou, who won European individual and team gold as just an eight-year-old under Michael Jung, double World Young Horse champion Tenareze, and licensed stallion Britannias Mail (out of Badminton and Burghley winner Headley Britannia). His son Tresor Mail is licensed in France, and is competing succesfully at CCI3* level, finishing 8th at Blenheim in 2015, then winning the CCI2* at Le Pin au Haras and picking up 5th in the Boekelo CCI3* in 2016. Pin Up De Mai has recorded six top-10 finishes at CCI/CIC2* level from 2015 to 2016, while Vassily du Lassos was 6th at the World Young Horse Championships as a six-year-old and 4th as a seven-year-old.

His first foals were born in 2003, and had immediate success when two of his fillies finished 4th and 5th at the French Foal Championships that year. That first foal crop continued to impress as they developed and the Vice champion at the National 3 year old Stallion Show in 2006 was the Jaguar Mail son Play Again D’Orchival. Play Again brilliantly won the two free jumping tests with a score of 8.7 out of a possible 10 and was second for the gaits test with a 7.8 out of 10 points. In 2010, Jaguar Mail had 11 horses qualified for the 4, 5, 6 year old French Championships at Fontainebleau. Jaguar Mail was the only stallion to have two offspring competing in the 2013 World Young Eventing Horse Championships. Of these two offspring, Tenareze was the commanding winner of the 6-Year Old Championship, finishing on his dressage score. Just as his father before him, Jaguar produces excellent horses in multiple disciplines.

This talented stallion offers a lot of blood and size. All three gaits show good quality and his canter stands out with its suppleness, balance, and adjustability. He has quick reflexes, good strength in his back, and a strong technique behind. Jaguar offers a super character that is generous and respectful; he is totally rideable and trainable, and is easy and kind to handle on the ground.