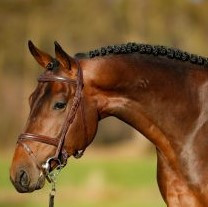 
Terms - €1000 +VAT for unlimited attempts with frozen semen on one named mare in one breeding season, if the mare is scanned not in foal by the end of September €700 +VAT will be refunded.

About & Performance - Je Suis Equus Tame was approved at the KWPN licensing show with a great performance test which set him up to have the reputation as an athletic, careful horse. He is a very interesting stallion for breeders which his cross of french bloodlines, his father won Silver Team Medal in Caen in 2014. Je Suis's bloodlines are are some of the best in France with a pedigree that goes directly back to the full sister of Pomone B who was individual World Champion in 1966. With rider Steven Veldhuis the pair are currently appearing at CSIYH1* classes across Europe.

Sire - Qlassic Bois Margot was an exceptional competition stallion with french rider Simon Delestre appeared on the podium of some of highest profile shows such as the Longines Grand Prix in La Baule where they placed 5th in 2017, they also came 5th in the Rolex Grand Prix in Geneva in 2016, that same year the pair came 2nd in the CSIO5* in Aachen, placed 7th at the FEI Nations Cup in Rotterdam, 2nd in the Longines FEI World Cup. In 2015 they took home silver at the Rolex Grand Prix, and in 2013 they took gold at Nations Cup Final in Barcelona. Due to so many high class placings it resulted in a lifetime prize money of over one million Euros.

Damline - Damsire Quaprice Bois Margot is one of the best sons of the Olmpic Quidam de revel in breeding with such an enormous percentage of offsping gaining FEI results. Quaprice du Bois Margot competed on the highest international Grand Prix level with Julien Epaillard. This dam line produced more than 18 licensed stallions such as Le Martin, Clintino, Caesar v/d Helle, Cezaro, who competed successful at the open jumper level and numerous other successful sport horses.