When Johnson enters the ring, all people will sit up! 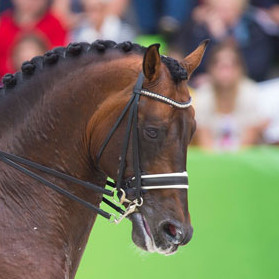 
Terms: €1950 + VAT, allowing unlimited attempts with chilled semen (dependant on competition schedule - some frozen doses available). If the mare is certified not in foal by the end of September, €1750 + VAT will be refunded. Shipping/health paper charge to pay each transport.

About - Johnson is one of the most successful grand prix stallions currently on the circuit. “His outstanding attitude has made the greatest difference at the highest level. Even if he is almost unable to do something, Johnson will do it for you anyhow”, rider Hans Peter Minderhoud says about his number one horse. “When Johnson enters the ring, all people will sit up. He truly is a king!”

Performance - Johnson has been competing successfully at top level for several seasons, and was outstanding as a young horse before embarking on his international career. He finished 9th for the Dutch at the 2016 Rio Olympic Games, and was the Dutch star at the 2015 European Championships; spear-heading the gold-medal-winning team and taking home an individual bronze in the grand prix special. He was also on the Dutch team at the 2014 World Equestrian Games, never scoring below 74% and helping to secure the team bronze. Johnson was overall champion of the KWPN stallion show in 2005, top ranked in the stallion series 2006-07, and 6th in the World Young Horse Championships in Verden in 2007 as a five-year-old.

Sire - Johnson is a son of the keur stallion Jazz. Jazz himself performed at grand prix level with his rider Tineke Bartels, as did grandsire, Cocktail, and has 50 licensed sons, including Olivi, T-Movistar, Wynton, Westpoint, Boston, Chagall, Don Olymbrio, Don Juan De Hus, Desperado and First Choice. Almost 100 Jazz offspring have reached grand prix, and he is currently ranked fifth on the WBFSH Sire Rankings, having led the rankings for four years (2008-2011) and having never been out of the top five since the current rankings began; a more successful record than any other stallion.

Damline - Damsire Flemmingh, a jumper himself, adds plenty of athleticism and is famous for producing the grand prix dressage horses and super-sires Krack C and Lingh. When mixed with Jazz blood on the damline, Krack C has produced the stallions Vivaldi and Zhivago, with the reverse cross giving us Don Juan De Hus. Johnson's third sire Sultan is not only the sire of the Oldenburg approved stallion Sion, but also of the world-famous jumper It's Otto (ridden by Geoff Billington). Johnson descends from the famous 'Reina' line; the renowned mare line from breeder Wim van Arkel. Famous horses from this motherline are: Darkdream, Sultan, Kallisto, Mendel, Charmeur and Waldo.

Progeny - Johnson's offspring are very impressive. Often more blood in type than their sire, they all inherit his fantastic, easy temperament and willingness. He is the sire of Bretton Woods, hailed as the "new Totilas" in Holland, Jack Jones, and more than 25 other licensed sons in a relatively limited breeding career. In autumn 2012 the Johnson x Wolkentanz II stallion Jack Sparrow was run-away favourite in the four-year-old stallion series. Several of his offspring are now competing at grand prix and Johnson is carving a reputation as an outstanding sire.