An exciting young prospect by the grand prix stallion Apache 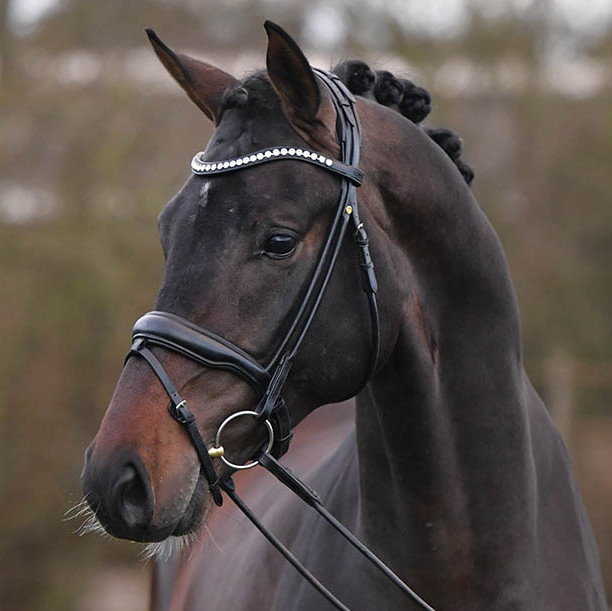 
Terms: €1600+VAT for unlimited attempts with chilled semen for one breeding season. If the mare is certified not in foal before the end of September then you get a 50% credit the following year to use on any stallion from the same stud. If the first AI of the year was 1st July or later, then the credit in the event of non-pregnancy is 100%.

About - Jovian is a young stallion with a fascinating overall appearance; a king in every inch! The trot and canter are large-framed with optimal elasticity, the walk characterized with excellent rhythm and a lot of ground coverage.

Performance - In 2017, Jovian won the Dutch three-year-old championships, and in March 2018 he was the winner of the performance test in Verden with 9.01 and a few days later awarded as a premium stallion at the Danish Warmblood licensing in Herning. With a total score of 9.08 Jovian won his sport test 2019 in Münster-Handorf with among others, 9.5 for trot, canter, rideability and overall impression as well as a 10 from testrider, Philipp Hess.

Sire - His sire is the impressive Apache, reserve champion from the KWPN licensing in s'Hertogenbosch and superior winner of the stallion competition in winter 2011/2012. Under Emelie Scholtens, Apache is now consistently successful at Grand Prix level and was qualified for the Dutch Olympic squad in 2015. Desired by his first offspring, Apache is one of the most popular breeding stallions in the Netherlands.

Damline - The dam, Zinith, who was successful in sport before her breeding career, delivered several offspring with different stallions and was awarded as elite mare by the KWPN. The grand sire, Tango, was international Grand Prix winner with Hans-Peter Minderhoud. Jovian is related to the great sire and Grand Prix stallion Jazz/ Kristin Becker in the third and fourth generation and represents the family of NL-Merrielijn 27, which is considered one of the most important breeding bloodlines in the Netherlands.