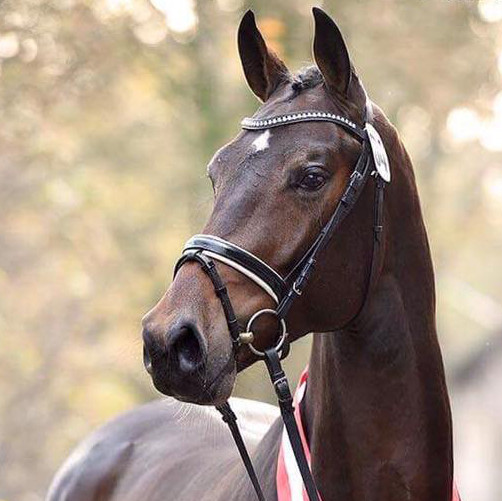 
Terms - chilled semen €1000 + VAT, allowing unlimited attempts within the season on one named mare.  If the mare is certified not pregnant by the end of September, then a 50% credit applies the following year to spend on any stallion from the same stud. If the first AI of the year is July 1st or later, the credit the following year is 100%. If the following year also results in no foal, the credit for the next year will be 50% or 100% (depending on the date) of the top-up fee paid in the second year only.

Also available frozen at €750+ VAT per dose allowing the registration of one foal, no refund or credit due if the mare is not pregnant.

About -The Westphalian licensing of 2016 was marked by an outstanding lot of show jumpers which shone brilliantly at free jumping. Among those, one stallion was especially remarkable: Karajan. All experts agreed, his free jumping was sensational: with overview, perfect manner and boundless capacity. A stallion with a good face, correct foundation, supple body and outstanding basic gaits. His phenomenal pedigree carries three Olympic fathers, who dominate international show jumping. Kannan, currently No. 5 in the world rankings.

Sire -  Kannan of Nino de Buissonnets (Steve Guerdat), the Olympic champion of 2012 and fourth of Rio 2016. Verdi, still actively participating in sports at the age of 14, won the silver medal with the Dutch team in London and the Gold medal at the Worid Championships and the European Championships. Cornet Obolensky, currently No. 3 in the world rankings, was represented by six offspring in Rio. Six million Euros in lifetime earnings were won by his offspring. The falling dam line carries Lincoln L by Landadel, who won international jumping Grand Prix, as well jumping stallions Don Juan and Servus. The dam line provided licensed stallions Sarmorano and Sulaiky v.d, Helle by Stakkato, as well as Cornet Session and Coloseo by Cornet Obolensky.

Performance - In 2017, Karajan finished his outstanding 14-day performance test with the overall score of 8.90 and individual score of 9.28 in jumping. The next year Karajan won several jumping horse tests of novice and elementary level. He finished the sports exam in Verden with an overall score of 9.02 and the emphasis on jumping and e score of 9. Karajan's first year of foals impressed with above average movements, good type and harmonic frames. In 2019, Karajan finished the second part of his sports test for licensed stallions with the overall score of 9.65 points as champion. He received 10 points for potential and overal impression each. For rideability and gallop he scored 9.80 points. Karajan won and was placed in jumping horse tests up to medium level and qualified to the German National Young Horse Championships.

Sire - His sire Kannan was internationally successful with Francois Mathy Jr. and Michel Hécard. He has produced over 200 international show jumping horses, including the Olympic Champion Nino des Buissonets and Hickstead Derby winner Adventure de Kannan, and has been placed in the top group of the world WBFSH ranking for years; in 2016, he lies in fifth for jumping and tenth for eventing; an exceptional feat as no other stallion appears in the rankings for more than one discipline. He is the sire of CCI4* event horses Billy Beware, who has won six international classes and finished sixth at Badminton 2014, his first CCI4*, and Ogustin du Terroir, who was second in the Vairano Nations Cup and fourth in the under-25 CCI3* at Bramham.

Damline - Damsire Verdi needs no introduction. His international successes place him among the very best in the world. He has appeared at every senior championship since 2011, winning two team golds (WEG 2014, Aachen 2015) and a team silver (London 2012). With Verdi in the team, The Netherlands have also won the Nations Cup Final in Barcelona 2014, plus the legs at Rotterdam, St Gallen, Falsterbo, and Rome - with Verdi jumping the coveted double clear on three of those occasions. He has finished in the top ten of a World Cup qualifier thirteen times, including second in Verona, Helsinki, and Gothenburg. He has competed at the World Cup Final four times, finishing sixth (Lyon 2014 & Vegas 2015), seventh ('s-Hertogenbosch 2012) and eleventh (Gothenburg 2016). Individually, Verdi has won the GCT Madrid Grand Prix, the Lyon and Al Ain Longines Grands Prix, and the Grand Prix of Salzburg. Verdi has won almost €400,000 on the GCT Tour alone.

Third sire Cornet Obolensky competed in the 2008 Olympics at the young age of nine. He is a foundation stallion in the breeding of modern jumping horses, and is currently ranked third in the 2016 WBFSH Sire Rankings. The total earnings of his offspring, including former World Number One Cornet D'Amour, Cornado NRW, Cornet's Cristallo, Cocoshynsky, Cornetto King, and Comme Il Faut, are over €3.7 million. The Clinton/Heartbreaker cross is a proven formula that has produced multiple grand prix jumpers including Cordess and Consul DL Vie Z, and 18 licensed stallions. Cornet is still one of our most requested stallions in recent years.