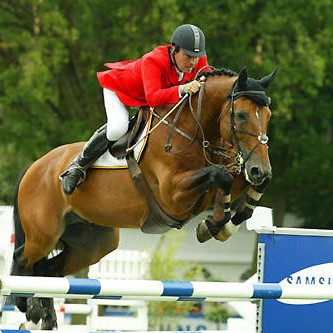 
Terms - €1800+VAT per straw, which allows the registration of one foal. If more than one foal is born from the straw, there is an additional charge of €3000+VAT per foal which is payable on the birth of the foal. The semen cannot be sold or transferred to a third party without written permission from Elite Stallions (UK) Ltd.

A contract to this effect must be signed before any semen can be dispatched; please enquire for details.

About - Kashmir is an exceptional producer of jumping horses, and these are some of the last straws available from this great stallion. Kashmir jumped at top level himself, and has gone on to produce more than 90 horses jumping at 1.60m level. He is a tall, large-framed stallion with a lot of blood, being 7/8 Selle Francais, with the strength of the much sought-after G-line from the damline. Kashmir brings technique, power, reflexes, size, but most off all he brings super mentality. Always willing to work, a big heart, enough blood but not crazy, super horses to work with.

Performance - As a four-year-old, Kashmir jumped 15 clear rounds from 16 starts, and as a five and six-year-old year he was 10th and 9th in the Belgian Championships for his respectivr age group. As a seven-year-old, he had several top-10 placings at international level and was 7th in the age final. As an eight-year-old, he began jumping grand prix classes and placed 5th at Wisbeq, and 5th at the Rome CSIO. The following year he was 7th in the CSI3* of Liege, and as a 10-year-old he made his mark on the international scene, with top-10 placings at CSIO5* level and several Nations Cup appearances with Phillipe Lejeune.

Sire - Kashmir was one of the very first foals from Nabab de Reve, who went on to become a BWP Ambassador stallion, producing more than 80 grand prix show jumpers including 2010 World Champions Vigo D'Arsouilles, 6-year-old World Champion Winsome vd Plataan, Olympic individual silver and World team gold medallist Glock's London, and the rising star Glasgow van't Merelsnest, plus more than 60 licensed sons including Inschallah de Muze and the promising young stallion Poker de Mariposa. Nabab jumped up to 1.60m himself, also under Phillippe Lejeune, competing at the European Championships in Arnhem in 2001 and being part of the bronze-medal-winning team at the 2002 World Equestrian Games in Jerez.

Damline - Nabab's dam produced mostly fillies after Kashmir, and her daughters between them 15 international jumping horses and five licensed stallions, among them the 1.60m jumpers Triomphe van Schuttershof and Angel vant Hof, and the 1.55m jumping Aragorn and Dakota van Schuttershof. Kashmir's full-sister Sissi van Schuttershof also jumped at 1.60m level. The grand-dam Gotha produced the 1.60m grand prix jumper La Gioconda, and she is herself a half-sister of the 1.60m jumper Laghano and the licensed stallion Corghano. The wider damline is resposible for an enormous number of successful horses including the 1.60m grand prix horse Firth of Lorne, Fabriana, Lariccello, Quattros, R-Gitana, R-Panama, Luis 54, Check In, and Quentin PJ.

Progeny - Kashmir's progeny speak for themselves, and despite his limited availability, he has been inside the top 20 on the WBFSH Sire Rankings for the past 8 seasons, reaching fifth in 2018. More than 90 of his sons and daughters jump at international 1.60m level, among them Olympic individual silver medallist and European champion H&M All In, and fellow Olympians Reveur de Hurtebise, Fedor, and Gazelle, who was the winner of the $500,000 Queen Elizabeth II Cup at Spruce Meadows. His other successful offspring include CSI4* winner Riesling du Monselet.