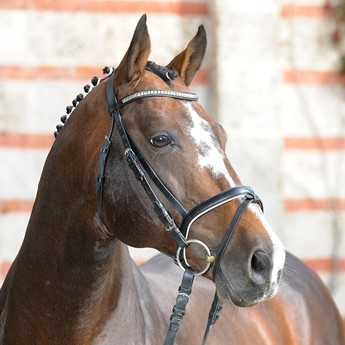 
Terms- €1050 +VAT for unlimited attempts with chilled semen on one named mare in one breeding season, if the mare is certified not in foal by the end of September €700 +VAT will be refunded.

About- An outstanding jumper with huge scope and outstanding conformation.
Larimar is strongly influenced by the thoroughbred combination of Ladykiller xx, Anblick xx and Sacramento Song xx.

At the Neumünster stallion grading, Larimar by Lavall II drew attention to himself for his correct conformation and his very good basic gaits.His canter in particular was judged extremely favourable. He also stood out for his scope and good judgement over the jumps. Larimar underwent performance testing in Schlieckau and completed the test at 127.28 index points overall (5th). His free-jumping was graded 10.0 by the judges and his stadium jumping 9.5 by the test riders. Larimar’s quality as a sire is becoming more and more obvious. Other than his highly successful sport horse offspring, he has produced five stallion-graded sons and 16 state premium mares.

Lavall II has had particular impact as a dam sire: for example the stallion Carvallo, as well as Checker (Beat Maendli) and Cash 63, the winner of more than 100,000 euros in prize money with Marco Kutscher, are all out of Lavall II daughters. Larimar’s bloodline is very much influenced by TB stallions. Lavall II carries TB genes through Landgraf I by Ladykiller/TB, the TB stallions Anblick and Sacramento Song and through Wahnfried by Waldenser/TB.

Damline-  The TB influence on Larimar is  increased through the dam’s side, through Lord, another son of Ladykiller/TB out of a mare by TB sire Cottage Son. Larimar’s 2nd dam, Hanka, carries TB genes through her TB sire, Little Lion.

Larimar’s dam, Elastic Dream, as well as his 2nd dam, Hanka are highly rated state premium mares. At 2- and 3-yearold, Elastic Dream reigned supreme as champion of the Elmshorn elite mare show. At 7- and 8-year-old, she was successfully shown in jumping classes by Eva Bitter and Dirk Ahlmann. Bred to Capitol I, Hanka produced the licensed stallion Capan, a jumper which competed for Finland at the Europeans.

Other Larimar offspring  in competition include Larisal with Urh Baumann, successfully shown at international advanced level with year earnings of more than 70,000 euro.

Larimar’s daughter Deleyn has attracted attention with Irishman Shane Sweetnam, placing in the final of the Aachen, Tryon, and Toronto youngster tours.