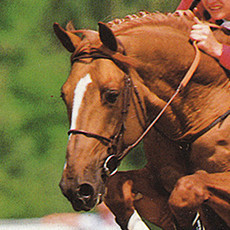 About - We are thrilled to bring Le Tot de Semilly to British breeding. Le Tot de Semilly brings strength, style, suppleness, carefulness in addition to an exceptional mind and a brilliant foreleg technique; he consistently passes on all of these qualities to his offspring.

Performance - From 1988 to 1991, Le Tot won 22 international, and 63 national, grand prix classes. He was the first French horse to be sponsored by the French Equestrian Federation. At seven years old, Le Tot de Semilly was part of the gold-medal-winning team in the European Young Riders Championships in Cervia, and placed fourth in the individual competition. The next year, he took second place in the Nations Cup in Hickstead. At nine years old, he placed second in the Wiesbaden CSI GP, won the Bois le Roi GP, and took third place in the Gijon GP and the Nations Cup.

Progeny - Le Tot's best known offspring are without doubt Diamant de Semilly and Itot du Chateau. The diminutive Itot du Chateau was an international grand prix sensation for many years under Edwina Top-Alexander, amassing more than €3.5million in prize money. They appeared at two Olympic Games (London 2012 and Hong Kong 2008), finishing in the top-10 individually on both occasions, as well as the World Equestrian Games and the World Gup Final. Itot won the final of the GCT tour in both 2011 and 2012, and the Rolex Geneva GP, among his many other grand prix wins.

Diamant de Semilly was successful immediately as a young horse, qualifying for the French Championships at Fontainebleau as a four-, five-, and six-year-old. His international career was exceptional; team gold at the 2002 World Equestrian Games (and individual ninth), team silver at the 2003 European Championships, and 2002 French Champion. He was selected for the 2004 Olympic Games, but missed out due to injury. His international results include many wins and placings at grand prix, including: winner of the Pioltello Grand Prix, the St. Lô Grand Prix, and the 1999 Caen Stallion World Championship, third in the Cervia, Normandy, and Auvers grands prix, fourth in the Lummen and Modena Nations Cups, and eighth in the grands prix of Munchen and St. Lô. On his final competition appearance, he won the CSI4* Liege Grand Prix. His success as a stallion has also been enormous - among his licensed sons are the ever-popular Diarado, Dominator Z, Favorit ASK, Elvis Ter Putte, and Emerald.